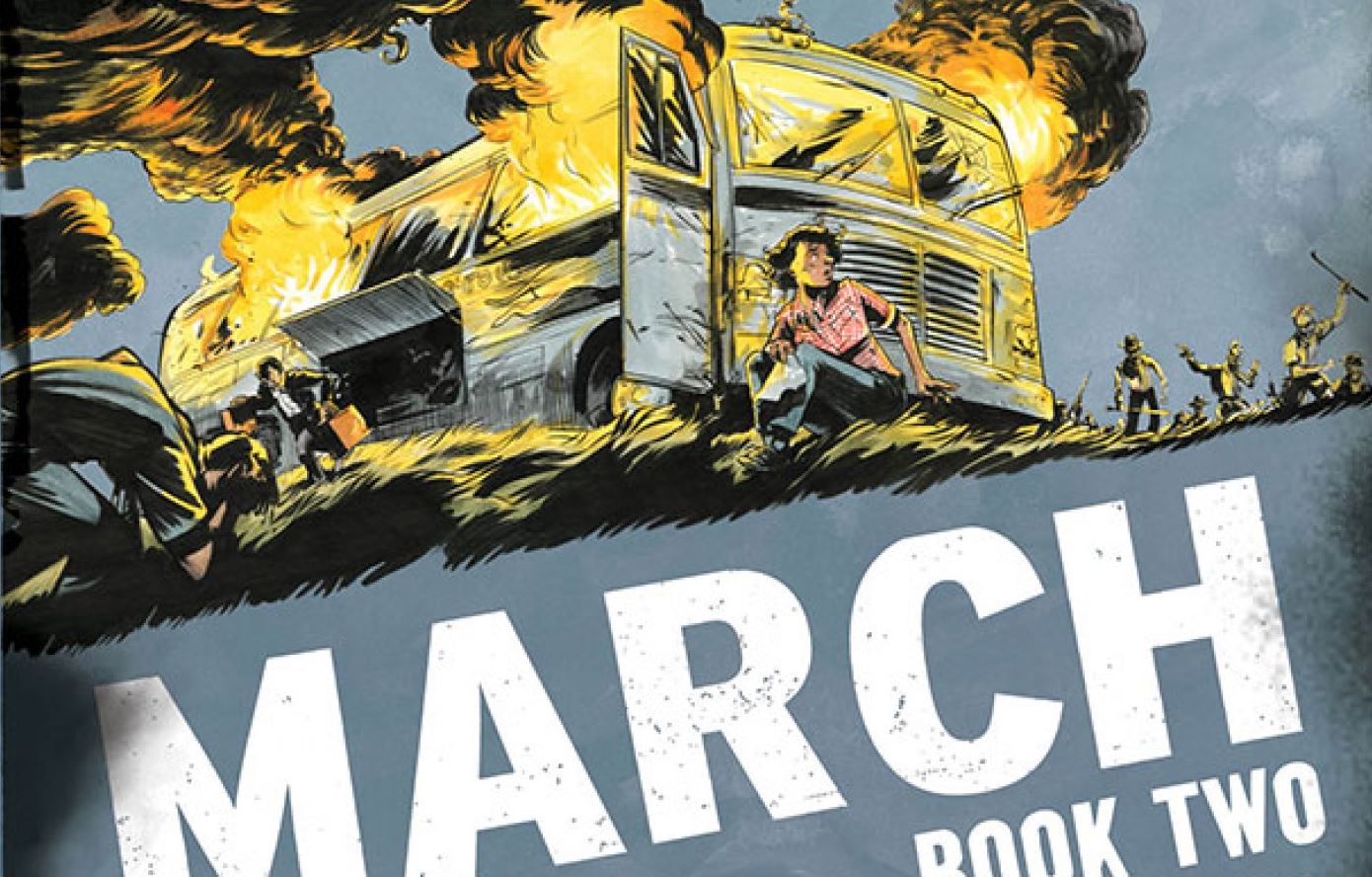 I read a lot of great comics each year and discuss many of them right here at ComicBook.Com. I look at the fusion of art and words, and how it affects us as readers and people. Comics are capable of providing us with experiences and perspectives far beyond our own. They can take all of the artistic tools developed over millennia and apply them to creating empathy and understanding. Comics are an incredibly potent medium, but it is still decidedly rare for a comic, or any work of art, to be truly important.

In March: Book Two Congressman John Lewis, Andrew Aydin, and Nate Powell continue the story of Lewis’ involvement in the Civil Rights Movement. This volume, the second of a planned trilogy, focuses primarily on the Freedom Rides in 1961, Lewis’ leadership in the Student Nonviolent Coordinating Committee (SNCC), and the 1963 March on Washington for Jobs and Freedom. The three year span of Lewis’ life covered here is vastly different than his origins in March: Book One. He is confronted with violence and terror unlike anything encountered in the previous volume. The humiliation and verbal abuse witnessed at the Nashville sit-in campaign does not compare to the atrocities committed by folks like Eugene “Bull” Connor, the Ku Klux Klan, and even the children of Birmingham, Alabama.

There is no hesitance in Powell’s presentations of these scenes. He does not attempt to obscure the worst moments or make the ugliness more palatable. These events are presented as they were: violent, upsetting, and occasionally nauseating. One of the most challenging sequences comes when a bus of Freedom Riders is attacked in Birmingham. For six pages the comic shows Freedom Riders, the press, and even federal agent John Seigenthaler brutalized by the crowds. One panel reveals a hand stabbing at one man’s bloodied face. The subsequent panel reveals it to be the hand of a child with small black eyes and a terrible grin. His mother cheers him on, screaming “Git them eyes!” 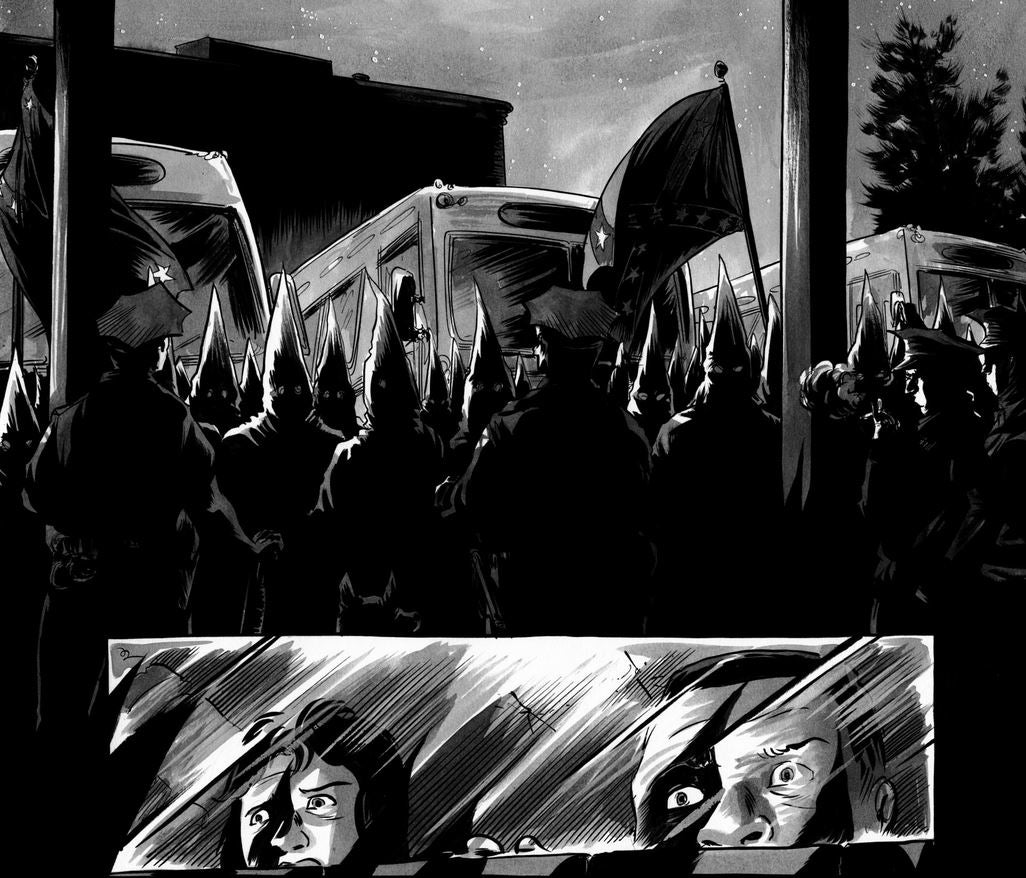 In a beautifully composed two-page spread (featured on the cover), Powell creates a snapshot of what awaited the Freedom Riders on their journey. A woman is posed slightly off center taking shelter under the burning shell of a bus, riders fleeing to the left and segregationists charging from the right. It is an iconic image encapsulating the philosophy of non-violence. It is a human being confronting fire and hatred with no defenses, a tremendous depiction of human bravery.

Moments like this caused me to set the comic down and reflect on what I was reading. The horrors recreated by Powell in these pages are not exaggerations or melodrama. They are history, the history of my country and fellow citizens barely separated from today by 50 years. Every beating, every bombing, every death occurred. The blood depicted in these pages feels real and it is.

The specific acts of violence shown in these pages may now be part of history, but they hold a mirror up to the present day as well. Lewis and Aydin have framed their narrative with the inauguration of President Barack Obama. Powell weaves short glimpses of that cold January morning between long segments of the story, reminding readers of the inseparability of our present and this portion of history. That connection is not entirely triumphant. Even as Poweel shows Aretha Franklin singing “My Country ‘Tis of Thee” at President Obama’s inauguration, he peppers the two-page spread with small panels of beaten activists and proud segregationists. They form a backdrop to even this accomplishment and the final words of the song are followed by a Molotov cocktail. In the savagery of public officials and citizens like Bull Connor and the Alabama National Guard, there is a sense of recognition.

In the last year alone, police have killed Eric Garner, John Crawford III, Michael Brown, Tamir Rice, and many other unarmed black men who were approached while neither committing or threatening violence. American prisons are still disproportionately filled with black men, with 1 in 3 black men expected to be incarcerated at some point in their lives. Mandatory minimum sentences, stop and frisk practices, and other legal methods are used to primarily target non-white communities. For all of the victories of the Civil Rights Movement, there are still plenty of men like Bull Connor in positions of power. March: Book Two is not only a record of history, but a reminder of the threats to justice and equality that still exist.

Lewis and Aydin do not lose track of the historical significance of this recording though. There is often a feeling that they are scared names or details might be lost to the ages. Lewis makes a point to name the men and women he interacts with whenever possible. Even minor characters who only appear for a page have their names bolded. A minor confrontation between Lewis and Stokely Carmichael (a future leader of the Black Panther Party) is highlighted even though Carmichael’s impact on Lewis’ story is negligible.

The comic spends more time on leaders who had both a significant impact on Lewis and the success of the Civil Rights Movement. Some panels and pages are blacked out to only show the face of a single man and Lewis’ description of them, forming a miniature biography. The focus in these panels does not lie with the best known members of the movement, those found in every public school’s history textbooks. Instead, Lewis focuses on men like A. Philip Randolph and Bayard Rustin. Their contributions, place within history, and achievements are all detailed in an effort to remind readers that these accomplishments belong to many men and women, most of whom fail to be recognized by the American public. 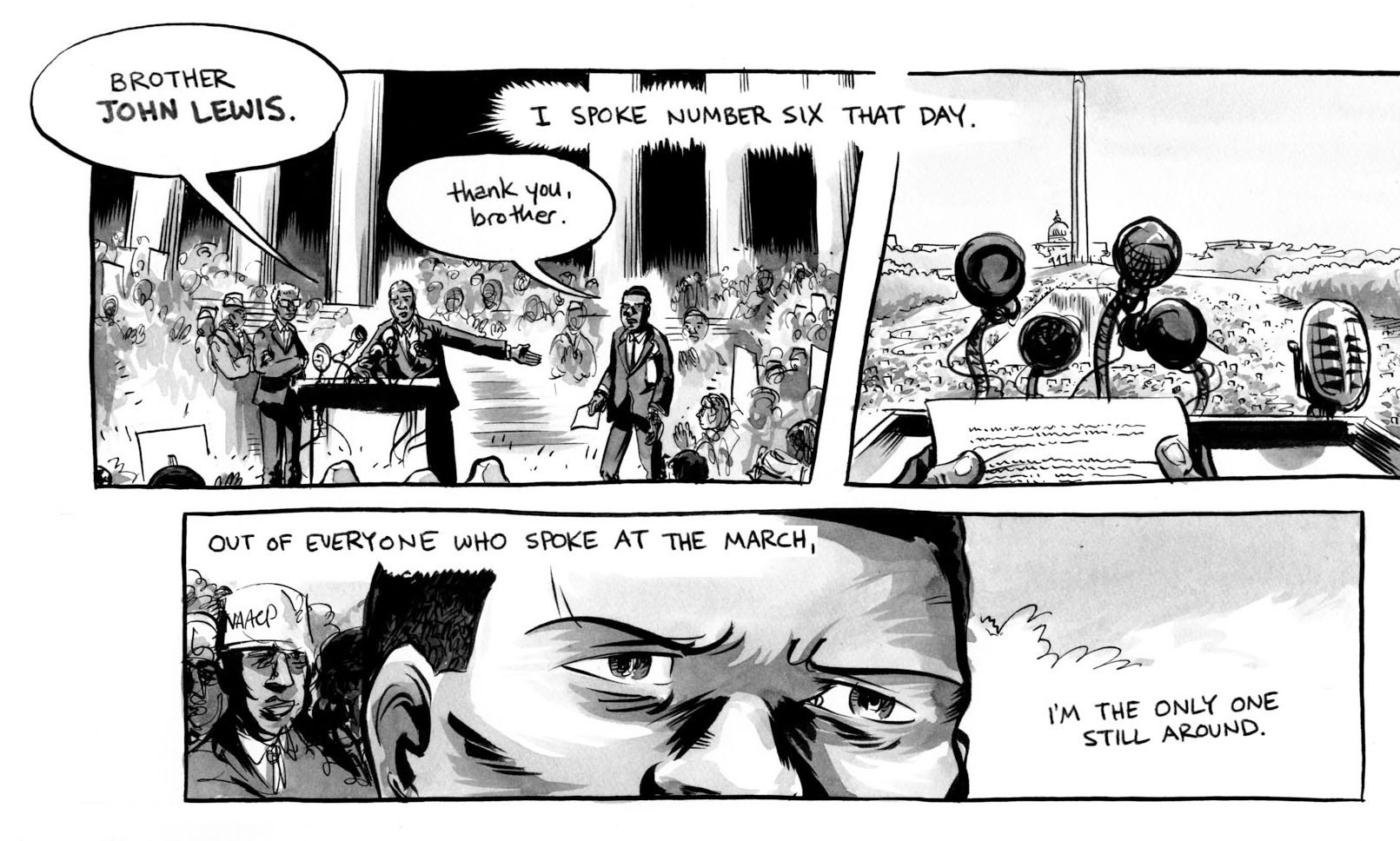 It is Lewis’ voice that brings Randolph and Rustin to life. Their portraits in March: Book Two are not merely a collection of facts. They reflect Lewis thoughts and opinions of them as human beings. That voice runs throughout the comic, guiding readers through both the most terrible assaults and greatest triumphs. His words humanize these iconic moments. The depiction of iconic moments like Martin Luther King’s “I Have a Dream” speech are not idolized. Instead Lewis reflects on his memory of the speech and its impact on him and the crowd. It is Lewis humanity, present in his voice, that makes these stories accessible.

Lewis’ historical voice rises to the forefront of March: Book Two at its conclusion in the form of his speech at the March on Washington for Jobs and Freedom. His speech again works as a reminder that the struggles of the Civil Rights Movement have not drawn to a close. Before thousands of people he points to the flaws in President John F. Kennedy’s Civil Rights Act before it was passed. He cries out at the end of his speech “Wake up, America! Wake up! For we will not stop, and we will not, and we cannot be patient.” It is a cry that seeks to be heard now, a demand for Americans to rise up against injustice in all of its forms. Lewis’ message is every bit as potent today as it was in the capitol 52 years ago.

The conclusion poses this victory against one of the most horrific crimes committed during the era. Martin Luther King’s brave words are set back-to-back with a tremendous explosion testing  the non-violent philosophy and hope he and Lewis have espoused. It is a difficult ending, one that points to the ongoing nature of this struggle, the endless march forward.

March isn’t over and our shared march towards an America where all people will all be judged not by the color of their skin but by the content of their character isn’t over either. We cannot look at what happened to Eric Garner or Michael Brown or Oscar Grant or Renisha McBride or Tamir Rice or John Crawford or so many others and believe that we have achieved a society governed by justice and equality. That doesn’t mean it isn’t possible though.

Lewis’ story in March: Book Two is both a reminder of how far we still have to go and of the change that is possible when we dedicate ourselves to a cause. It is both a fearsome warning and a shining illustration of bravery and hope, telling us of the horrors committed in hatred and the accomplishments made in love. March: Book Two is not only Lewis’ story, it is the story of SNCC and the incredible human beings who composed the Civil Rights Movement. It is an important comic, one capable of changing those who read it for the better.