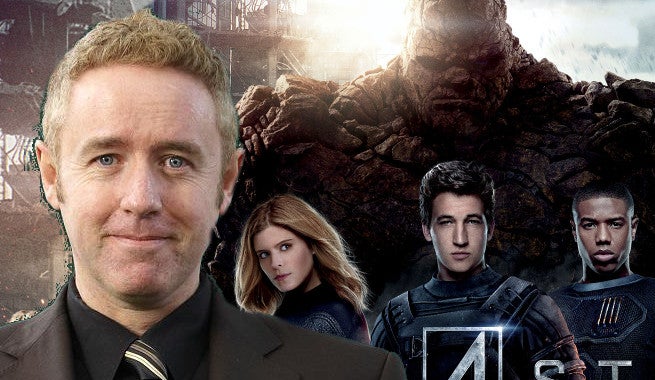 Mark Millar is one of the busiest creators in and out of comics. Coming off the major theatrical success of Kingsman: The Secret Service, the Scottish writer is always looking ahead to his next project, including those that aren't his. Back in 2012, Millar teamed up with 20th Century Fox as a creative consultant on the studio's upcoming Marvel licensed films, including the Fantastic Four and the X-Men. With a few X-Men movies under his belt, we're right on the brink of a new Fantastic Four film - the first under Millar's watch.

During a chat about Kingsman: The Secret Service (which you'll see in full later today), we asked Mark if he had seen Fantastic Four and what his thoughts were on its impending release.

"I've seen chunks of it but not the complete movie, and it's looking good. What I'm really excited for is to see how many people are surprised by it," said Millar. "I remember everybody bitching about Fantastic Four for about six months then the trailer came out and everyone is like 'this is really good.' I think it'll surprise people."

When I asked Mark what he meant about fans being surprised by it's release he offered up this interesting little tidbit before we ended our chat.

"I think you don't want to be in a position where everyone is expecting something and then they're disappointed. I think people are coming and they're just sort of like, hoping for the best. I think that's a good way to watch a movie."

What do you think ComicBook.com readers? Are you still excited to see what Josh Trank and Co. have in store for you with Fantastic Four? Let us know below!

Kingsman: The Secret Service is available now on Digital HD and on Blu-ray and DVD June 9th.