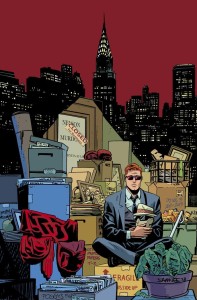 #36, due out February 2013, is the final issue of the series, Chris Samnee confirmed via Twitter. The confirmation ends speculation that began this morning regarding the series' fate after an answer in the letter column of today's Daredevil #32 seemed to suggest the series was ending. Editor Steve Wacker said this in a response to a fan letter: "Thanks, Jaleel. Many of you seem to have enjoyed DD colorist Javier Rodriguez's art work on his recent two-parter and I certainly hear you. Javier will be back to draw issue #34 in a couple of months to give Chris time to focus on our big two-part finale to this era of Daredevil. Sad, I know, but all things must end, right?" The obvious conclusion is that there will be an All-New Marvel Now! launch, probably with a new creative team, announced sometime between March and June. Waid's run on Daredevil has been a critical and audience favorite, winning multiple Eisner Awards. The series was one of a number of titles--including Hawkeye, Gambit and Captain Marvel--which had launched just prior to the launch of the Marvel NOW! campaign, and so never got the relaunch treatment at the time. Captain Marvel will relaunch as part of All-New Marvel Now in January with Kelly Sue DeConnick still writing it. Gambit has been cancelled. So far, Hawkeye remains untouched. "They're...interesting. And quite unexpected and quite familiar at the same time," Waid recently told Newsarama of his plans for 2014 and Daredevil's 50th Anniversary. "They may or may not involve a drastic shift in Matt Murdock's career and lifestyle. But we do know this one thing for sure: the Waid/Samnee/Rodriguez/Caramagna team isn't going anywhere, and we're striving for new heights!"