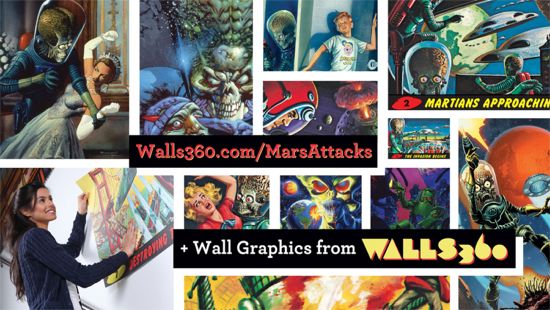 The first issue of Mars Attack from IDW Publishing arrived in comic book stores in late June and quickly sold out of its first print run. Now, Topps and Walls 360 have announced that they will be releasing a new wave of removable wall graphics based on the series of cult trading cards. The new expanded assortment of Mars Attacks wall graphics will feature comic book covers from the IDW series. Here are the quotes from the press release. "In 2012, 50 years after the release of the original trading cards, Mars Attacks returned to comics in an all-new series from IDW Publishing," according to Adam Levine, Topps Licensing Manager. "Today, you can get these stunning comic book covers as on-demand premium wall graphics from Walls 360!" "The Mars Attacks trading cards, which were drawn by renowned comic book artists Wally Wood and Bob Powell and painted by legendary pulp artist Norman Saunders, were decidedly controversial on their release in 1962," according to John Doffing, Co-Founder and CEO at WALLS 360. "Kids loved them, but the cards prompted parental concerns due to the sensational storyline and over-the-top graphics.  50 years later, these images make for some amazing wall graphics from Walls 360!" 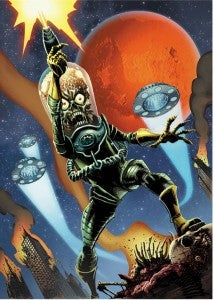 "The original Mars Attacks series enjoys the distinction of being the most sought after and valuable non-sport trading card set of all time, and Issue #1 of the new Mars Attacks comic immediately sold out - featuring 57 variant covers," according to Tavia Campbell, Co-Founder and COO at Walls 360.  "Now they are ALL available as premium, re-positionable wall graphics from Walls 360 - the perfect new medium for these iconic images!" "The imagery featured on the original Mars Attacks card series has over the years become an enduring icon of sci-fi and horror," said Adam Levine, Topps Licensing Manager. "As part of our campaign to return Mars Attacks to its pulp roots, WALLS 360 has used the original negatives to reproduce the original trading card artwork as high quality wall graphics in stunning detail.  And today we launch an amazing NEW series of Mars Attacks wall graphics, featuring cover artwork from the new IDW comics!"