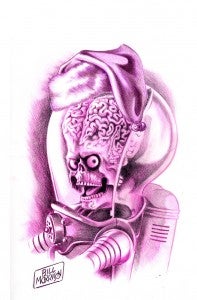 IDW Publishing is reporting that Mars Attacks #1 has sold out of its first print run, with all 57 variant covers totally gone from Diamond Comics Distributors. The roughly 55,000 copies that sold through at Diamond will make the issue one of the best-selling single issues of the year not sold by DC or Marvel, well ahead of the estimated 35,000 copies of X-O Manowar #1 that sold out for Valiant last month.

No immediate plans were announced for a second printing, although one is likely and fans unable to find a copy of the sold-out first print can get theirs from ComiXology. If there is a second print, it's a safe bet fans will get yet another variant cover, bringing the total number to 58, which has to be a record.

IDW also announced Mars Attacks the Holidays, a 48-page, anthology-style one-shot that will be in comic stores in late October with stories contributed by Dean Haspiel,Fred Hembeck, Ian Boothby, and Bill Morrison. The lineup and premise seem roughly in line with the Simpsons Treehouse of Horror anthology comics that Bongo does, which routinely feature great guest artists who have the rare opportunity to reinterpret the characters of the Simpsons universe in their own style. Morrison provided the cover for Mars Attacks the Holidays, or at least the image provided alongside the release, which is at right.

Mars Attacks Sells Out With More Than 50,000 Copies