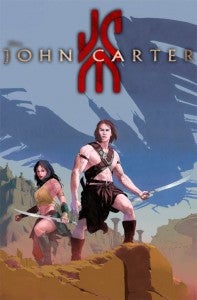 Marvel Entertainment and Disney Publishing Worldwide have announced a new comic book called John Carter: World of Mars. The all-new comic will serve as a prequel to the upcoming John Carter movie from Walt Disney Pictures. John Carter: World of Mars tells the story of how John Carter, Princess Dejah Thoris and Tars Tarkas are set on the path that brings them together. The comic will be a four issue limited series written by Peter David with art by Luke Ross. "We're thrilled to bring fans their first look at the world of John Carter before the blockbuster film wows audiences next year," said Marvel Editor In Chief Axel Alonso. "It's been a pleasure working with Disney, Peter and Luke to craft a powerful story that will appeal to both the legions of John Carter fans and those who are new to this exciting world." Director Andrew Stanton said, "I am really thrilled to be collaborating with Disney & Marvel on this project and look forward to audiences exploring the world of John Carter via this exciting comic offering. I have wanted to see this property on the big screen since I was a young boy and hope that John Carter: World of Mars will excite and inspire fans of the series much like I was inspired many years ago." The John Carter movie is scheduled to be released in theatres on March 9, 2012, while John Carter: World of Mars #1 is scheduled to be released in October of 2011.