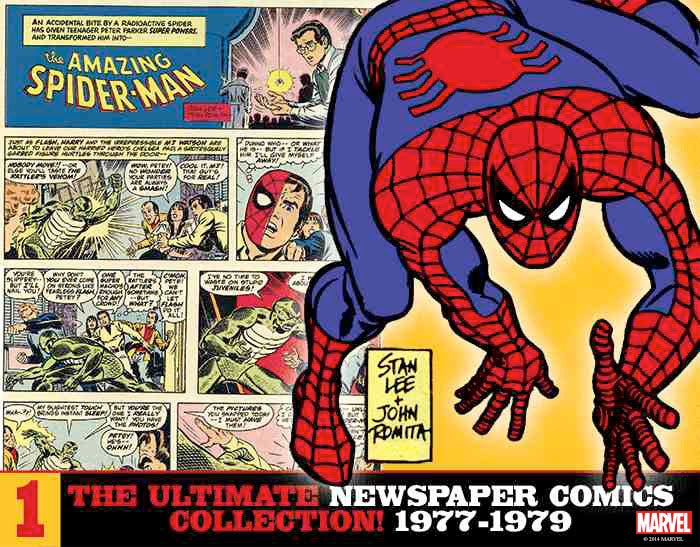 Over the course of New York Comic Con, IDW Publishing announced not one but two major initiatives in cooperation with Marvel Entertainment.

On Friday, IDW announced that The Amazing Spider-Man was headed to IDW's Library of American Comics imprint, where years' worth of Stan Lee/John Romita comic strips will be collected in hardcover.

Launched in 1977, the Spider-Man newspaper strip was drawn by master Spider-artist John Romita Sr. and written by none other than Spider-Man co-creator Stan Lee. As the series unfolds, the artistic torch was passed to Larry Lieber (Stan's younger brother), Paul Ryan, Alex Saviuk, and legendary inker "Joltin'" Joe Sinnott.

LOAC's Spider-Man series is designed by Dean Mullaney and edited by Bruce Canwell, both winners of multiple 2014 Eisner Awards for Genius, Illustrated: The Life and Art of Alex Toth.

"Dean and I both grew up reading the Marvel Comics of the 1960s and '70s," said Canwell. "In the third grade, I got sent home at noontime for daring to bring my copy of Spider-Man #53 to school! Lee and Romita wrote and drew that comic book, and it's great fun bringing their newspaper strip work to a fresh audience. I hope to donate a copy of our first volume to the library at my former grade school!"

The Amazing Spider-Man, Volume 1 goes on sale in early 2015.

Saturday, IDW announced that Avengers fans will have one more way to keep up with their favorite Marvel Super Hero team, in the form of The Avengers Micro Comic Fun Packs!

The Micro Comic Fun Pack line is a format that IDW pioneered at retailers outside of the traidtional direct marketfast becoming a fan-favorite. They consist of full-length, pocket-sized comic-book story, along with exclusive back-up material ranging from character bios to "how-to-draw" material to landscape pages designed for sticker interaction, as well as a range of different collectibles like posters, stickers, standees, or tattoos.

The Avengers Micro Comic Fun Pack release will include a unique comic, character bio, standee and poster for fans to collect. Micro Comic Fun Packs reach new audiences with great content and are available at both local comic shops and mass retail locations like Target and Toys R Us.

"This is a great new avenue for Marvel to get The Avengers into the hands of our younger fans," said David Gabriel, SVP Sales and Marketing at Marvel. "IDW and Marvel have created a fun new product for a younger audience and made it readily available within areas we typically do not have a strong presence in."

The first set of The Avengers Micro Comic Fun Packs, featuring Captain America, Thor, Iron Man, and the Hulk, is planned for spring of 2015, with a second set due to be released for the 2015 holiday season.

"The Avengers are the perfect team for Micro Comic Fun Packs!" said IDW Director of Business Development, Jerry Bennington. "The team is big and bold, no matter how small the package you put them in. These packs will be loaded with all kinds of fun material—fans of The Avengers and new comic book fans alike will be buzzing with excitement when they see what we have planned."