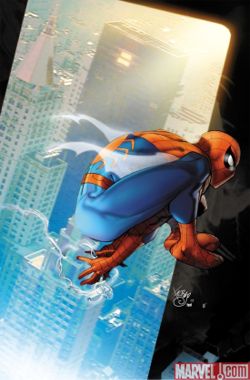 Marvel Comics has just announced the first new Spider-Man monthly series in two years. After the events of Amazing Spider-Man #600, Spider-Man's life will become even more unpredictable, which will open the door for a new ongoing Web of Spider-Man series. The new Web of Spider-Man series is scheduled to launch in October 2009. "With the Gauntlet storyline starting up and many classic adversaries of Spider-Man coming back to the book, we wanted to find a place to tell you more about them without it eating up too many pages of the thrice-weekly Amazing Spider-Man," said series editor Steve Wacker. "So while we were tossing ideas around on where to best put that stuff, beleaguered assistant Tom Brennan came up with the notion to bring back the Web title as a way to give a home to stories to people caught up in Pete's life. Starting with the first issue's Kaine story by JM DeMatteis and then continuing onto stories about Electro, the Rhino, the Lizard and many more by Web-Head Fred van Lente and regular Spidey artist Barry Kitson, the stories here directly impact what we're doing in Amazing Spider-Man!" In the first issue of Web of Spider-Man, one of Spider-Man's greatest and most controversial foes will returns. In addition to spotlighting Spider-Man's enemies, Web of Spider-Man will also feature the continuing adventures of Spider-Girl. Web of Spider-Man #1 is written by J.M. Dematteis and Tom Defalco with pencils by Val Semeiks and Ron Frenz. The cover is by Pascual Ferry with a zombie variant cover by Mirco Pierfederici.