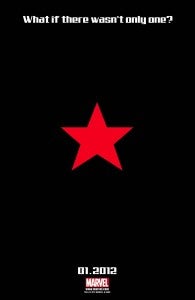 In the back of today's Fear Itself #7.1: Captain America, Marvel Comics announced Winter Soldier #1 by current Captain America writer (and Captain America and Bucky co-writer) Ed Brubaker and his longtime collaborator Butch Guice. While reports have varied depending on interpretation, it does appear as though the book will star Bucky Barnes, atoning for his sins committed while under Soviet mind control after he was revived from his apparent death and first took up the Winter Soldier identity. The announcement solves two mysteries--what book the teaser at left was promoting when it was released by Marvel a couple of months ago as well as what the mystery Ed Brubaker project solicited for January 2012 was--but of course raises its own, given that the main content of Fear Itself #7.1: Captain America dealt with the aftermath of Bucky's apparent death during the recently-concluded Fear Itself event. Of course, there's also the question raised at the top of the teaser: "What if there wasn't only one?" Does this mean that perhaps Bucky himself was cloned and that the Bucky we'll see in Winter Soldier #1 has never been Captain America? Or does it mean that there was simply more than one Winter Soldier and that, when Bucky returns by whatever means he does, he will bump up against some characters who came out of the same project as him? Certainly the latter isn't without precedent, particularly in Brubaker's run on the Captain America titles, as both Steve Rogers and Bucky Barnes ran up against alternate iterations of Captain Americaduring their time wearing the star-spangled chainmail. Whatever the answers, they will likely not be clear until the release of the title. Winter Soldier #1 will be released in January.

Photo: CM Punk Spotted Publicly for the First Time Since AEW All Out, Injury Confirmed