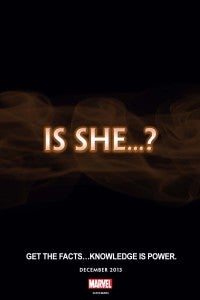 Another vague hint as to the big secret set to hit the Marvel Universe the day Infinity #3 is released. The image at right was just released, along with the caption "It could be anyone. Find out who, September 18th!" Given the color, the cosmic scope of Infinity and recent history in the Marvel Universe, the "she" in question may very well be Angela. But that's just a blind guess; it's not clear how she might tie into the previous "Is He...?" and "Are they...?" teasers isn't clear. There's been speculation that those two will tie into The Inhumans, who are playing a key role in Infinity. One of the new Inhumans has been revealed as the son of Thanos, which might be the "he" in question, and The Inhumans as a group could be the "they." If that's the case, though, who would be the "she" here? Hard to say.