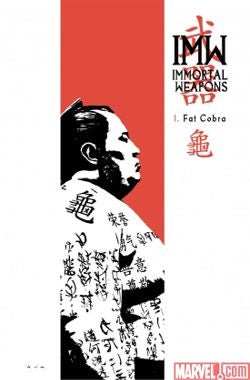 Are you ready for some Kung-Fu Fighting? Well, come and get it in Immortal Weapons. Marvel Comics has announced the Immortal Weapons Sketchbook, featuring a behind-the-scenes look at the series, courtesy of Marvel Digital Comics Unlimited. Catch a sneak peak into what's coming up for Danny Rand. Where do his Immortal Weapons fit in this new world? In the sketchbook, Marvel is revealing bios for every character, plus an exclusive nine page, full color, fully lettered preview of Immortal Weapons #1. The extra-sized Immortal Weapons #1 is scheduled to arrive in comic book stores on July 22, 2009. Immortal Weapons #1 is writtin by Jason Aaron and Duane Swierczynski with pencils by Mico Suayan and Travel Foreman. The first issue will also have a special variant cover, both the regular and variant cover are by artist David Aja.