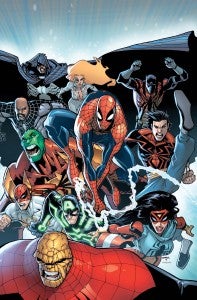 Marvel Comics has announced an event at The Palm celebrating the upcoming 2011 San Diego Comic-Con. Marvel Comics artist Humberto Ramos of Amazing Spider-Man fame will be making an appearance at The Palm Restaurant in San Diego

Humberto Ramos will be working his artistic magic on the mural at 2:00 PM PST on Wednesday, July 20, 2011. This marks Marvel’s fifth year of celebrating with The Palm. The Palm Restaurant is located on 615 J Street in the heart of San Diego’s entertainment district.

Marvel Comics At The Palm For Comic-Con