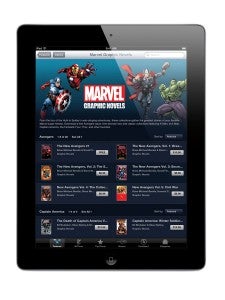 Back in November, when Marvel Comics began releasing its graphic novel library through Barnes & Noble's new Nook Tablet device, it was explained to Comicbook.com that the relationship was exclusive only for the moment. A Marvel representative at the time said that Barnes and Noble were "the first third party partner with which we've announced this distribution, but it doesn't mean we don't have plans for other or would limit ourselves in the future." The other shoe, it appears, has dropped. Today Marvel announced that they will be selling their graphic novels through Apple's iBookstore, opening up the books to a new audience and improving ease of use for iPad owners and others who may have previously had to purchase the books through the Marvel app or a Barnes & Noble Nook app and then read them through those apps instead of through a device's native reader. "Marvel is taking the world of comics by storm and releasing a massive selection of our best and brightest graphic novels on the iBookstore," said Peter Phillips, Senior Vice President & General Manager, Marvel Digital Media Group, in a statement. "For the first time ever, fans will be able to easily find and enjoy all of their favorite heroes including The Avengers, Spider-Man and The X-Men on iPad, iPhone, and iPod touch --  one of the best digital platforms for reading comics and graphic novels." Marvel's first wave of graphic novels available through the iBookstore include bestsellers like Civil War as well as licensed properties like Stephen King's Dark Tower series and Richard Castle's Deadly Storm. As one might expect this summer, the lion's share of the available books feature Spider-Man and The Avengers.