Marvel Comics has just announced that they are launching the largest marketing and promotional campaign in Marvel's comic book history in 2014 to promote the All-New Marvel Now. 'It's important that our fans and retailers know that this a brand-new project worth getting excited about. This isn't some extension or continuation. All-New Marvel Now! is a thrilling new entity that's bringing unmatched energy and focus to our already-robust line of titles," said Axel Alonso, who is Marvel Entertainment Editor-in-Chief. Exceeding the investment of the original Marvel NOW! initiative, the massive media blitz for All-New Marvel NOW! is estimated to reach 100 million prospective readers – both new and existing. "We're extremely proud of each and every one of these accessible new series," said David Gabriel, who is Marvel's SVP of Sales, Print & Digital Publishing. "So we've gone to great lengths to make sure hundreds of millions of people, the world over know, that All-New Marvel NOW! is the best place to jump in to the best comics on the market." "Whether you've never read a Marvel comic before, or you read them all," Gabriel continued. "These bold new titles provide something exciting for everyone." As part of the promotional campaign, Marvel plans social media outreach, new levels of targeted web and video advertising, and massive television, streaming and radio campaigns estimated to touch over 100 million consumers. Joe Taraborrelli, Marvel's Senior Communications Manager, emphasizes, "2014 is the year where Marvel is going to be at the forefront of pop-culture. From promotional initiatives spanning movies, television, radio, digital, streaming and print, Marvel is once again going to be changing the game about how the comic book genre is seen and absorbed." Taraborrelli continues, "Marvel is producing some of the most eclectic and entertaining stories the world has ever seen and we are ready to bring the Marvel Universe to audiences, new and old, through all new captivating channels." Marvel will be providing participating comic book shop retailers with marketing collateral, in-store trailers, FREE All-New Marvel NOW! Previews samplers, and more. In addition, every first issue bearing the All New Marvel NOW! branding includes a code for a free digital copy of that same comic on the Marvel Comics app for iOS and Android devices. Select .NOW! titles will also come with a digital code for the entire first collection of that series for absolutely free. 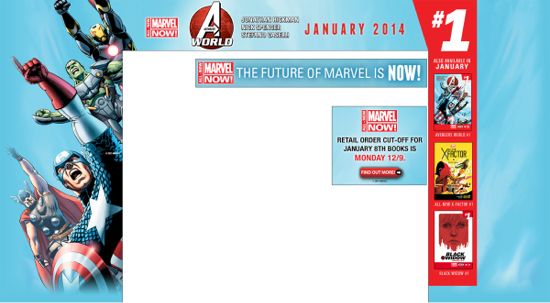 Marvel Comics Launching Largest Marketing Campaign In Their History In 2014