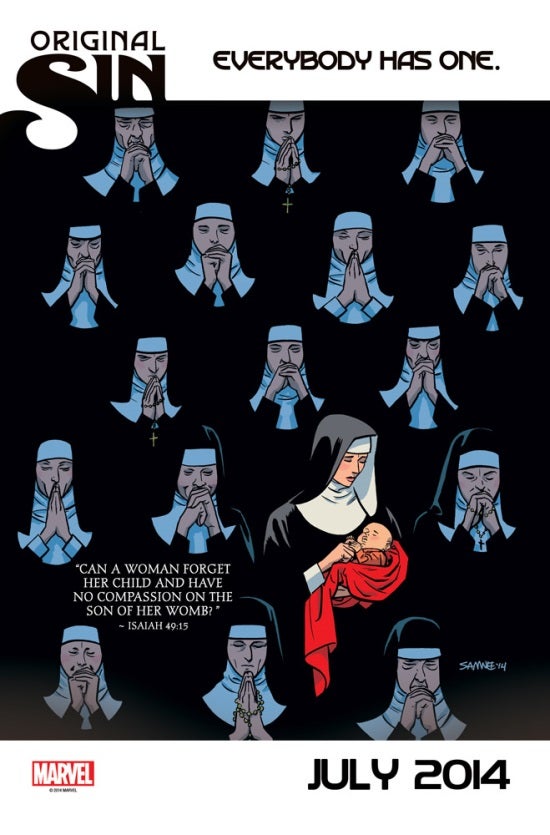 Marvel Comics has released another teaser image for Original Sin, the upcoming crossover event. These teasers continue to imply that everyone in the Marvel Universe has an original sin of their own and this time Daredevil is the one implicated. It's interesting to see a teaser image for Daredevil as the series usually doesn't get too heavily involved in the meta-narrative of the Marvel Universe. The image has several nuns praying, but one is holding a child in a red blanket. There is a Bible verse about the love of a mother for her child. Does Daredevil's original sin have to do with his mother? We expect to hear more details soon about an issue of Daredevil that will be tied into the events of Original Sin. In Original Sin, Uatu the Watcher is murdered. The killer takes the Watcher's eye, which has gazed upon the Earth for eons. The eye has seen the secrets that the Marvel Universe has tried to keep hidden, and now those secrets are coming out. It's up to the heroes of the Marvel Universe to answer the question, "Who killed the Watcher?" Original Sin #1 ships in May.

AEW's Kyle O'Reilly Announces the Birth of His Daughter Janie

Alexa Bliss Asks WWE Fans to Let Her Story Play Out, But Many Aren't Listening