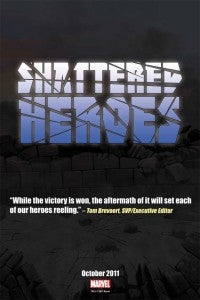 has released their first of three teaser images for Shattered Heroes. The Shattered Heroes series was first announced at the 2011 San Diego Comic Con, and it has been previously described as a series of one shots. Shattered Heroes will deal with the after effects of Fear Itself.

The teaser image doesn’t reveal much other than the Shattered Heroes logo against the darkened background of crumbled buildings. There is also a quote from Marvel SVP Executive Editor Tom Brevoort, which says, “While the victory is won, the aftermath of it will set each of our heroes reeling.”

Marvel Comics also released an additional Tom Brevoort quote, which provided the following description: “The war is over, and the warriors return home, carrying with them scars of battle, both physical and mental. Now the cost will be tallied, the casualties buried and mourned, the rubble swept up and carted away. But the damage to our heroes isn’t easily repaired, the wounds not easily healed. Decisions are made and lives are changed—can shattered heroes find renewed courage to go on?”

Of course, one of the big recent rumors is that Thor could die in Fear Itself. Brevoort’s quote refers to casualties, and even though Bucky Barnes is already dead, the use of the plural form of the word suggests there will be more than one casualty. Of course, there is also talk of wounds not easily healed, so maybe Thor will just be injured really badly but not necessarily killed.

Marvel Comics is also promoting the hashtag #ShatteredHeroes for fans to use in talking about the upcoming series on Twitter.