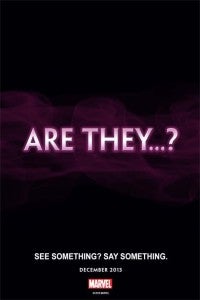 What could this new teaser mean? Perhaps, there is a clue in the text at the bottom of the teaser, which reads "See Something? Say something." It certainly sounds like it could be a hint at maybe an anti-mutant or anti-super powers storyline. As in, maybe people are supposed to say something if they see other people using super powers or other special abilities.

Along with the image, the email we received from Marvel Comics also included the message, "In the wake of Infinity, the Marvel Universe faces a new threat. Find out more, September 18th!"

Marvel Comics Teases A New Threat To The Marvel Universe