With Fear Itself coming to an end, Marvel Comics has begun offering up teasers about what comes next. Marvel Comics has already teased a mini-series called Battle Scars and a series of one shots called Shattered Heroes, and now, they have released a new teaser for a twelve issue mini-series called The Fearless. Fear Itself: The Fearless will be published bi-weekly and is scheduled to start arriving in comic book stores on October 19, 2011. The series is written by Matt Fraction, Cullen Bunn, and Chris Yost. Artwork on the series is by Mark Bagley and Paul Pelletier. The regular cover for the first issue is by Arthur Adams with a variant cover by Frank Cho. 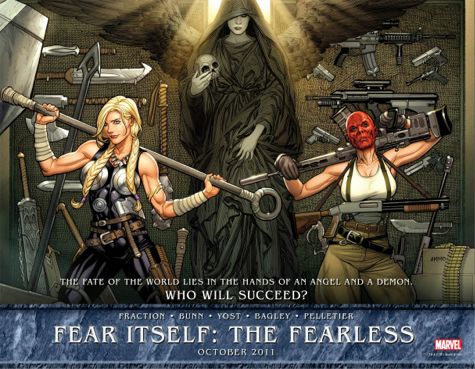 The teaser image for Fear Itself: The Fearless shows a Frank Cho illustration of Valkyrie and Red Skull's daughter Sin. Valkyrie is holding a giant hammer over her shoulders, while various swords and antique weaponry can be seen behind her. Sin is holding a machine-gun over her shoulders, while various other guns and modern weaponry can be seen behind her. The teaser tagline says, "The fate of the world lies in the hands of an angel and a demon. Who will succeed?" Marvel Comics is also promoting the Twitter hashtag #FearItself for fans to discuss the series. Marvel Comics will be holding a live blog with Marvel editors and writers talking about the series on Marvel.com on Friday, September 2, 2011 starting at 3 PM E.T.

Marvel What If? Fans Are Obsessed With Darcy & Howard The Duck

Marvel's Guardians of the Galaxy Preview: A Rocking, Hectic Time