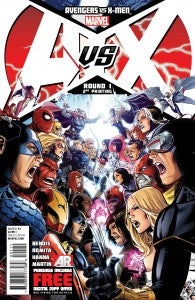 Not a dream, not a hoax, not an April Fool's joke--Marvel Comics has released their Marvel AR app today, allowing fans to get a first look at how "DVD features for comics" will work, on the same day that DC Entertainment debuted their new Mad Magazine app. DC, of course, did so becuase April Fools' Day is Mad mascot Alfred E. Neuman's birthday. They've been promoting the new app--which will, like Marvel's, include exclusive and interactive content--all weekend long at their blog. AppAdvice took a look at the new app, which they seem to enjoy--but remember to read the directions first and don't try to actually fold your iPad to find out what the Mad fold-in image looks like. Apparently they've figured out a way to make that work for you on the interactive version. Marvel's, meanwhile, is a less focused app but one that has far more long-term importance for their brand. The folks over at Bleeding Cool gave fans a brief write-up and first look at the Marvel AR (augmented Reality) app, by way of pointing their camera at an iPad and then pointing their iPad at a screen that displayed the cover to Avengers vs. X-Men #1, out on Wednesday. The cover itself features augmented features, whereby the logo, barcode and other promotional text disappears to reveal the complete art, which then rolls away to make room for a trailer for the miniseries. Bleeding Cool's video is embedded below, to give fans who don't have a smartphone with a camera an idea of what they're missing--or if you do have that access, just click on the image at left for a larger version so that you can see it for yourself without the whole four-screens-in-one thing. Both apps are free through Apple's App Market for iPad, although only Marvel's AR app is available for iPhone and other mobile platforms.