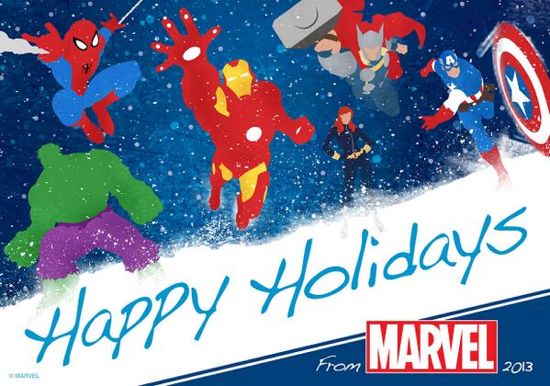 Earlier today, we posted some Christmas messages and photos from celebrities tied to comic books and pop culture. However, celebrities aren’t the only ones sending out holiday greetings.

Some of the companies behind the most popular comic book and science fiction characters have also shared their holiday greetings through social media. Marvel Entertainment tweeted out a Happy Holidays postcard with Spider-Man, Hulk, Iron Man, Black Widow, Captain America, and Thor.

DC Entertainment tweeted out a Happy Holidays greeting, along with an image of Superman with a rather unique snowflake that features the logos of Green Lantern, Batman, Wonder Woman, and Superman.

The BBC released a special video greeting from Tasha Lem wishing all the Doctor Who fans around the world a killer Christmas.

Happy Holidays from all of us at DC Entertainment. pic.twitter.com/BDPEYKivlI

From all of us at #StarWars, we wish you a very merry #Christmas! pic.twitter.com/i7XpJ0Edpw