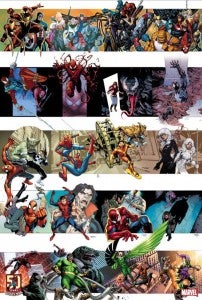 Having already passed 4 million fans on Facebook and 300,000 Twitter followers, Marvel launched a Tumblr blog today as part of a "Social Media Fan Appreciation Day" event that includes offering free shipping on orders from Marvel's store, a 99-cent sale on Incredible Hulk books through ComiXology and exclusive art and previews through their social media sites. The Marvel store sale is particularly notable given DC's high-profile revamp of their own store yesterday. Looking to "avenge" a day of lower sales while the competition reduced prices? Included in the "exclusives," so far, are a Spider-Man mini-poster by various artists and made available through the Facebook page (shown at right) as well as a first look at Spider-Men #2 by Sara Pichelli (below). 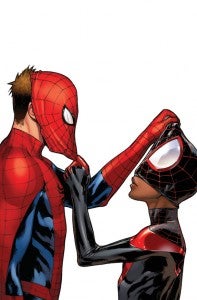 Keeping with the Spider-Man theme, they've released a special video preview of an upcoming episode of Disney XD's Ultimate Spider-Man (seen below), featuring the webhead's first meeting with Doctor Octopus. It's from a future episode, though, not from this week's episode, which features Wolverine and is written by comics luminary Brian Michael Bendis. Besides the exclusive content, Marvel has a few nice things that have been circulating on their social media presences today, too: The publisher has assembled a tribute to famed western comics artist Tony DeZuniga, co-creator of DC's Jonah Hex and a frequent contributor to Marvel's Rawhide Kid even some superhero material for the publisher. They're also running a contest for fans to enter to win a drawing from Sideshow Collectibles to celebrate the release of their Iron Man Mark VII figurine. Keep your eyes on Marvel's Facebook and Twitter pages throughout the day for more, and we'll keep you updated as more develops.