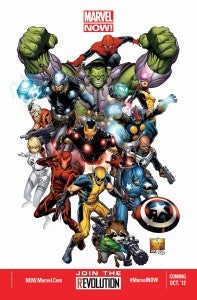 Marvel Comics has just made its first press release regarding their upcoming Marvel NOW! publishing initiative available to the media.

A months-long relaunch of more than a dozen titles that will see the publisher churning out a new #1 (nearly) every week, Marvel ties the endeavor in with its recently launched AR app, describing it as "the culmination of Marvel ReEvolution, the groundbreaking new initiative to evolve the comic book experience through innovation."

“This is the natural next step of the Marvel ReEvolution, as we evolve every facet of Marvel publishing,” explained Joe Quesada, Chief Creative Officer, Marvel Entertainment. “You’ve seen us craft new digital storytelling formats like Marvel Infinite Comics and bring added value to our comics with Marvel AR. Now our print comics leap into the future with a cinematic new look for our covers, exciting new designs for our biggest characters and stories that will send you on the kind of journey you can only get at Marvel.”

They reveal that every physical Marvel NOW! issue will come pre-packaged with a redemption code for a free digital copy of the same issue, and that the initative will kick off with Brian Michael Bendis' Uncanny Avengers, out in October.

That's not the only Avengers title we learn a little something about, though; while Avengers #1 by Jonathan Hickman and Jerome Opena had already been announced, today we discover that New Avengers will be relaunched as well--also written by Hickman but featuring art by Steve Epting.

They also provide the first official art from the publisher for the piece, but don't get too excited--really it's just a recolored and somewhat higher-resolution version of the piece they ran in Entertainment Weekly earlier in the week.

But, as we suggested when the initiative was announced, the publisher isn't comfortable with comparisons to DC's The New 52. “This isn’t a reboot or a reimagining," said Axel Alonso, Editor in Chief, Marvel Entertainment, in the press release. "Marvel NOW! is all about looking forward, building on our rich history of great stories and delivering new ideas.”

With those new ideas comes a fairly huge scope, too, according to the publisher. It's an entirely new status quo for nearly every character, including Captain America, whose Uncanny Avengers is less about dropping buildings on the bad guys and more about finding a way to peacefully coexist with mutantkind in the wake of Avengers vs. X-Men. Of course, that doesn't mean the book will be quiet and contemplative; the teaser information says,

"In Uncanny Avengers #1, the Avengers and X-Men must join forces to overcome the greatest challenge either team has ever faced, one so devastating that neither can afford to do it alone! Can Captain America’s newly assembled team find a way to peacefully co-exist while also dealing with the game-changing repercussions of Avengers VS X-Men?"

“We brought fans the biggest comic book event imaginable in Avengers VS. X-Men and now we’re taking the Marvel Universe to an exciting new place, beginning with Uncanny Avengers #1,” said Tom Brevoort, SVP, Executive Editor, Marvel Entertainment. “If you’re a long-time fan, all the stories you’ve read will give you even more enjoyment of what’s happening now—we’re not abandoning our past. But if you’re a new reader, this is where you’re going to learn just why Marvel comics are unlike anything else you’ve ever read. And no character is left unaffected by Marvel NOW!.”

And, of course, as with any event this big, Marvel is encouraging retailers to host launch parties the day before the release of Uncanny Avengers #1. While the series will be available around the country on October 10, the publisher will be providing "exclusive," "limited-edition giveaways" to "select retailers" who host parties on the 9th.