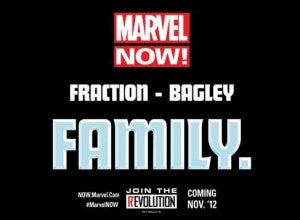 In possibly the biggest surprise so far this week, it appears that both Fantastic Four and its sister publication FF will be relaunched in November as part of Marvel's sweeping Marvel NOW! initative. The twist? Madman and I, Zombie artist Mike Allred will join one of the titles, both of which will be drawn by Matt Fraction.

The first of two new teasers has already debuted at USA Today, featuring the word "family" and the names of Fraction and current Avengers Assemble artist Mark Bagley. If "family" wasn't enough to convince readers (even though it's enough to convince USA Today and Newsarama, who wrote  speculative article on it as well) that it's Fantastic Four being rebooted here, the second teaser--not yet available online but referenced in the USA Today article--says "Extended," and includes Fraction's name alongside Allred's.

These teasers join the ones we've seen throughout the week that appear to be for Mark Waid and Leinil Yu's Hulk, Kieron Gillen and Greg Land's Iron Man, Jason Aaron and Esad Ribic's Thor and Deadpool by Brian Posehn, Gerry Duggan and Tony Moore (a bunch of D-Listers, apparently).