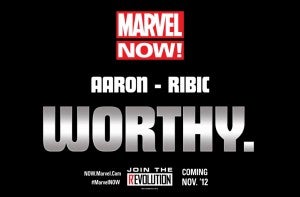 The second in a series of adjective-driven teasers for November's Marvel NOW! relaunch titles, one of which will presumably run every day this week in advance of the November solicitations starting to pop up next Monday, features the word "Worthy," along with the names of writer Jason Aaron and artist Esad Ribic.

As with yesterday's "Invincible" teaser, fans see this one and immediately think they've got the answer. This time, it's "Thor," not only because the God of Thunder has long been associated with the word (etched on his hammer, Mjolnir, is the claim that only the worthy can lift it).

Beyond that, both the color scheme of the typeface and the creative team are being seen as hints; Ribic has been rumored to take over a relaunched Thor title for some time, ever since before Marvel NOW! was officially announced.

Both of Thor's ongoing monthly titles were confirmed cancellations amid a crowd of titles mown down in recent months' solicitations, so it was widely expected that the Avenger would get at least one new title out of Marvel NOW!.

Jujutsu Kaisen Meets Attack On Titan In a Horrific Mash-Up

Loki: Did Kang Kill the Time-Keepers?

Avatar: Frontiers of Pandora Reveal Has Avatar: The Last Airbender Fans Wishing for a New Game