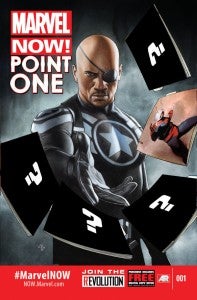 Well, that's probably not so surprising, is it? Who wants to bet that one of the other cards will be Rocket Raccoon?

Marvel Comics just issued a visual press release that revealed Ant-Man will join Cable and Nova as those "who will shape the future of Marvel NOW!", beginning with Marvel NOW! Point One in October.

The trio are, along with Nick Fury, Jr. (the guy throwing the cards) and a pair of as-yet-unidentified characters, a seemingly random grouping of characters, and whether they'll just be key players in the Marvel NOW! era or actually an official team put together by Fury is as yet unclear.

My Hero Academia Gets Emotional with Shoto's Plea to Izuku

Adult Swim Fans Are Thrilled With Tuca And Bertie's Renewal