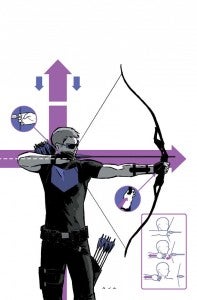 Marvel Comics has released a five-page preview of Hawkeye #2, upcoming from the company the first week in September from Matt Fraction and David Aja.

The critically-acclaimed series joins Daredevil as one of Marvel's best relaunches in recent years, and features a stylish David Aja cover that's designed to look like an archery instructional chart.

Given the minor controversy launched when an archery instructor criticized Jeremy Renner's form (and the Internet struck back at him, as they're wont to do), this may be a bit of a tongue-in-cheek cover, but even if it isn't, it's still beautiful.

Marvel is proud to present your first look at Hawkeye #2, brought to you by the superstar creative team of Matt Fraction and David Aja! The Arrowed Avenger is back on his feet and hitting the Marvel Universe to prove once and for all that he’s worthy of the title of Avenger! But he won’t be going it alone, as fellow archer hero Kate Bishop fights by his side!

The critics have spoken, Hawkeye is a hit!

Pencils and Cover by DAVID AJA

The Me You Love In The Dark #1 Review: A Dark Invitation to Inspiring New Settings