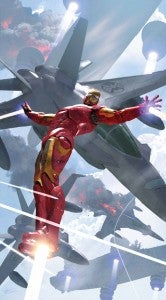 The Ultimates return in Ultimate Comics Ultimates #14, which is presumably ultimately exciting.

Possibly to the max.

In any case, the story ties into "Divided We Fall," and Marvel has provided a five-page preview of the issue for fans. It's written by Sam Humphries, with art by Billy Tan and Timothy Green II, and will be in comic shops on August 22.

Captain America, Thor and Iron Man are back together again in a version that looks very much like the one we saw in The Avengers, except that Thor has that glowing chestplate thing taht he's had since the Ultimate line launched.

Given the ever-shrinking line between what's the standard in the Ultimate Universe, the Marvel "616" Universe and the Marvel Cinematic Universe, it's hard to guess whether this series still brings something to the table that the other Avengers titles do not. Fans, any input?

Marvel is pleased to present your first look at Ultimate Comics Ultimates #14 – a Divided We Fall tie-in! With America still in turmoil from the City’s attack, someone is mysteriously working behind the scenes to keep it that way – but who? Can even the newly reunited team of Captain America, Iron Man, and Thor discover the identity of their foe and hold together the country at the same time? The red-hot creative team of writer Sam Humphries, and artist Billy Tan & Timothy Green II bring you the answers in Ultimate Comics Ultimates#14, assembling in comic shops everywhere, the Marvel Comics app, and Marvel Digital Comic Shop this August.