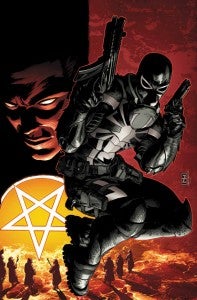 is getting a new creative team, but not a relaunch, as Rick Remender goes on to bigger and better things in the midst of the Marvel NOW! initiative that's sweeping the company's upcoming solicitations.

With a new status as a Secret Avenger and a new creative team, Flash Thompson/Venom's first issue under Cullen Bunn and Thony Silas will hit the stores on August 22, but the publisher has already made a preview available for fans. Check it out below; it's an intriguing change of pace for the series, with a J.H. Williams III-inspired splash page that makes those of us who like our superhero comics arty and pretentious think it may be time to give this one a try.

Marvel is proud to present your first look at Venom #23, brought to you by all-new creative team of writer Cullen Bunn and artist Thony Silas! Now that Venom is a card carrying Secret Avenger, Earth’s Mightiest task Venom with bringing in the demonic menace Damion Hellstrom! Except in order to do that, Flash Thompson finds himself face to fist with the Monsters of Evil! But what could they want with Venom? An all-new era of symbiote-super heroics begins in Venom #23, hitting comic shops everywhere, the Marvel Comics app, and Marvel Digital Comic Shop this August.