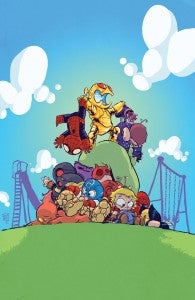 The Age of Ultron is coming!

The Age of Ultron is nigh!

The Age of Ultron is...about six or seven.

That's the takeaway from Marvel's latest Skottie Young cover, depicting the heroes of the Marvel Universe at the mercy of the diabolical robot with chubby little legs.

Check out the cover at right and the official information on the cover and the issue from Marvel below. Age of Ultron begins in March from writer Brian Michael Bendis and artist Bryan Hitch. The massive, universe-altering event series is meant to wrap its run quickly so that the publisher has time to begin their next massive, universe-altering event story over the summer.

Marvel is pleased to present your first look at Eisner Award Winning artist, Skottie Young’s, variant cover to Age Of Ultron #1! This March, enter the darkest days of the Marvel Universe as it’s heroes fight for from the blockbuster creative team of Brian Michael Bendis (All New X-Men, Avengers VS. X-Men) and Bryan Hitch (Ultimates, Fantastic Four). Evil has triumphed over good and leading this new age is none other than Ultron, the deadly sentient robot created by founding Avenger Hank Pym who turned on his creator to achieve his twisted  objective…the utter destruction of humanity. Now, it’s up to the few remaining heroes to band together and find any way to topple their new monarch. Can Wolverine, Emma Frost, Invisible Woman, Taskmaster, Beast, She-Hulk, Luke Cage, Spider-Man, and Moon Knight turn the tide? Find out this March in Age of Ultron #1!