Over the past couple of months, Marvel has been doling out measured teasers to unveil the members of their various Avengers teams in light of the upcoming Heroic Age, which will take place after the completion of the current Siege storyline. Another team gets the veil peeled back a bit, as two members of the upcoming series Secret Avengers, written by Ed Brubaker and drawn by Mike Deodato, are revealed today, and the membership may surprise you just a bit! Beast, long-time member of the X-Men and once an Avenger himself, will get a new membership card in this latest incarnation. Beside him will be War Machine, another "iron clad" character to be added to an upcoming Avengers roster, following Iron Man Tony Stark's addition to the flagship Avengers team. The series will take flight in May, alongside other relaunch titles such as Avengers Academy, and it will be interesting to see what each title plans to bring to the table as the new age of heroes begins in the Marvel universe! 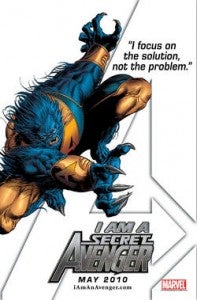