While Lucasfilm's decision to move their Star Wars comics to Marvel (leaving longtime partner Dark Horse Comics behind in service of the parent company's other big, recent acquisition) comes as a surprise to virtually no one, the simply-worded press release announcing the move yesterday leaves a lot of questions unanswered. There are continuity issues, creative issues, workload issues--all things that Marvel and Dark Horse have a full year to work out, but still things that are being asked online right now. So...which are the ones we've heard the most in the last day or so? 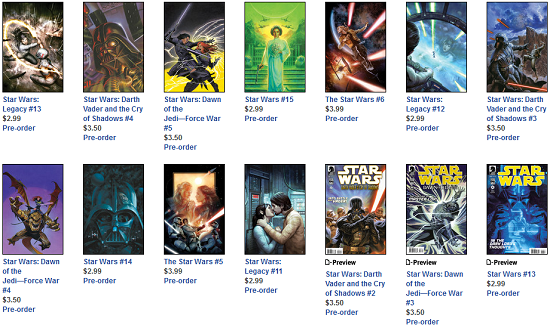 How many Star Wars comics will Marvel publish?

Star Wars is a staple of the Dark Horse line, and in any given month there can be between two and six Star Wars series and miniseries on the stands. Does Marvel have room for that kind of increase in its lineup? The publisher will put out 74 ongoing, miniseries and one-shot "floppy" titles in January 2014. That's titles, meaning that the ones double-shipping are only getting counted once. Increasing that number by five or ten percent will almost certainly require additional editorial resources, particularly since word from on high has always been that Lucasfilm is not always easy to please and Marvel may be more answerable to them than to other licensors. Of course, they could go back to just publishing a single title, called Star Wars. If they did, would it pick up the numbering of the original Marvel Comics series? The Dark Horse version by Brian Wood? Get a new #1? And what...well, nevermind. We'll ask the rest of the questions below. 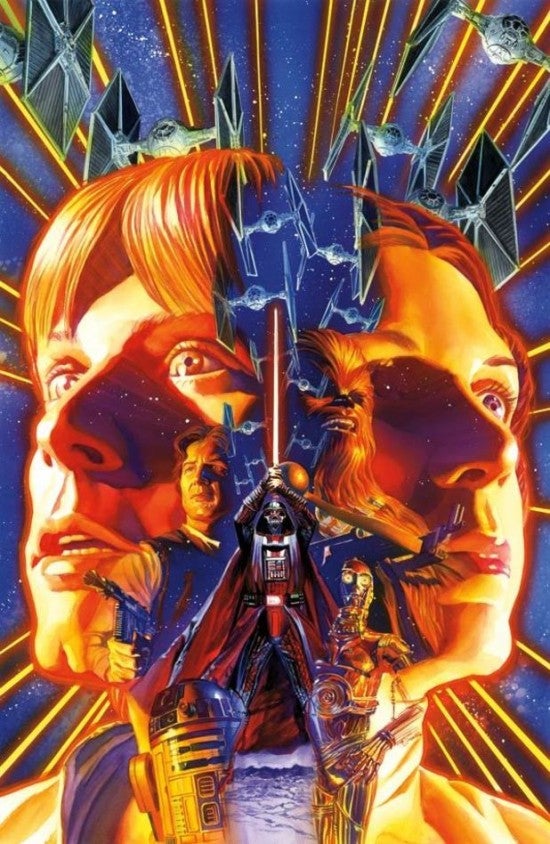 What does this mean for the Dark Horse stories? Will they follow the same storylines or start fresh? The Star Wars Expanded Universe is a huge hit with fans, but Star Wars Episode VII will reportedly go its own way and not concern itself with fitting into what had, until recently, been considered canonical stories overseen by Lucasfilm's print division LucasBooks. Does that mean Marvel's new Star Wars universe could take place in a different continuity than Dark Horse's, and/or that if that were the case, Lucasfilm could retroactively remove the Dark Horse books from continuity? Well, probably not, but it isn't impossible. Star Wars's continuity is not as complex as, say, DC Comics's--but it's pretty impenetrable to casual fans. Luckily, most of it doesn't matter because any given story, game, TV project or movie is probably self-contained enough that as long as it doesn't directly contradict the six existing films, the kind of fans who don't get how it works won't even notice. Per Wookieepedia, though, it was 2000 when Lucas Licensing appointed Leland Chee to create a continuity-tracking database referred to as the Holocron continuity database. The Holocron follows the canon policy that has been in effect for years, but the capabilities of database software allow for each element of a story, rather than the stories themselves, to be classified on their own merits. The Holocron's database includes an area for a single-letter (G, T, C, S, N or D) representing the level of canonicity of that element; these letters have since informally been applied to the levels of canon themselves: G-canon, T-canon, C-canon, S-canon, N-canon and D-canon. You can read much more about it there, but we'll focus for now just on the C- and S-canon. C-canon is most works created after 2000 and some past works that are grandfathered in to the mac daddy of all continuities. If something is considered C-continuity, that story happened, son. Unless and until it's retconned by something newer and more authoritative, that is--like when Episode II started tinkering with established Boba Fett backstory. The films have the final say. S-canon is a kind of secondary canon that basically becomes C-canon when elements of a story are needed or used in a C-canon story but can otherwise be dismissed if need be.  That might seem like a fine line, but really it is not. C-canon being downgraded to S-canon is relatively uncommon. S-canon being upgraded to C-canon is marginally more common but still not a frequent occurrence. The only thing higher than C-canon is G-canon--that is, canon derived directly from George Lucas's own works, such as the six existing films--although the television canon is considered nearly that authoritative, too. This is significant because, as far as most fans and creators are concerned, most Dark Horse Comics Star Wars stories are C-canon. Developed in close concert with Lucasfilm, the stories are rarely downgraded out of canon and have generally been accepted by TV, video game and novel creators as something to use as a guide (although both TV and games have their own continuities that can weave in and out of C- and G-canon). The Marvel Star Wars comics from the '70s and '80s are S-canon. There are likely elements of the Marvel Comics Star Wars Universe that have been written out of canon over the years. That point is, it's more likely than not Marvel will retain some semblance of the Dark Horse continuity for its comics. If they don't, it will require a fairly massive reworking of ideas of existing canon, which is a bigger project when there are TV, film and games involved than when it's just The New 52 or something. [caption id="attachment_73389" align="aligncenter" width="472"] 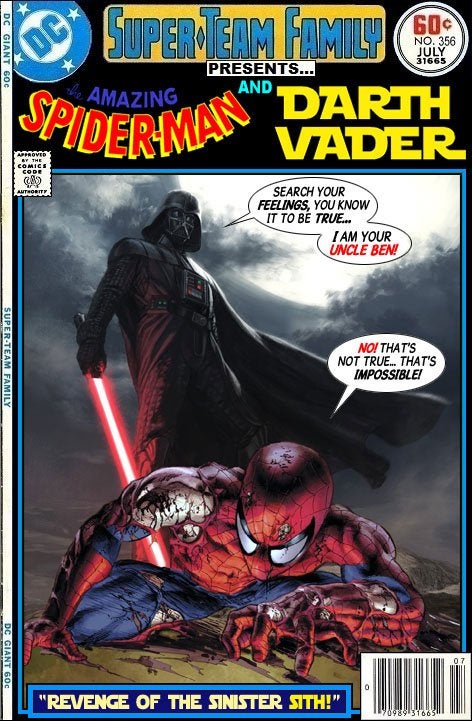 Credit: Rowsdowr[/caption] Will they be brought into the Marvel Universe, opening up team-ups with Marvel superheroes? This may sound absurd on the face of it, but we've got something to remind you: He-Man and the Masters of the Universe crossed over with Superman and the Justice League just recently. Just saying. 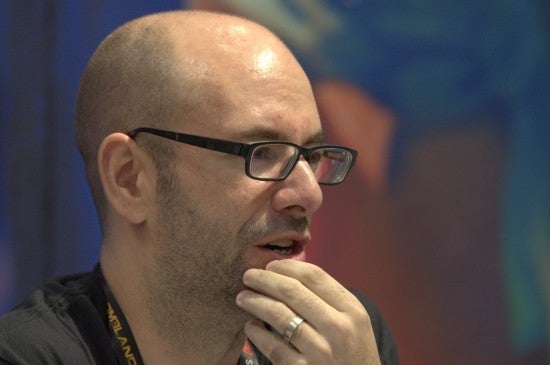 What about Brian Wood? On the heels of a sexual harassment controversy that was a massive distraction in the comics industry for about a week and a half, many expected Wood to feel some blowback. Comic creators are, after all, contractors and at-will employees and so can get fired for basically no reason at all, and with a great many fans threatening to boycott his books, it seemed likely Wood might lose at least one of his handful of regular gigs. So far it hasn't happened, but a change in publishers (and perhaps even in continuities) might be a perfect time for Lucasfilm to divorce themselves from him. After all, in the grand scheme of things Wood is a fairly big fish in comics, but for Lucasfilm, the extra thousand copies or so his name might move likely isn't worth the aggravation and boycott threats. 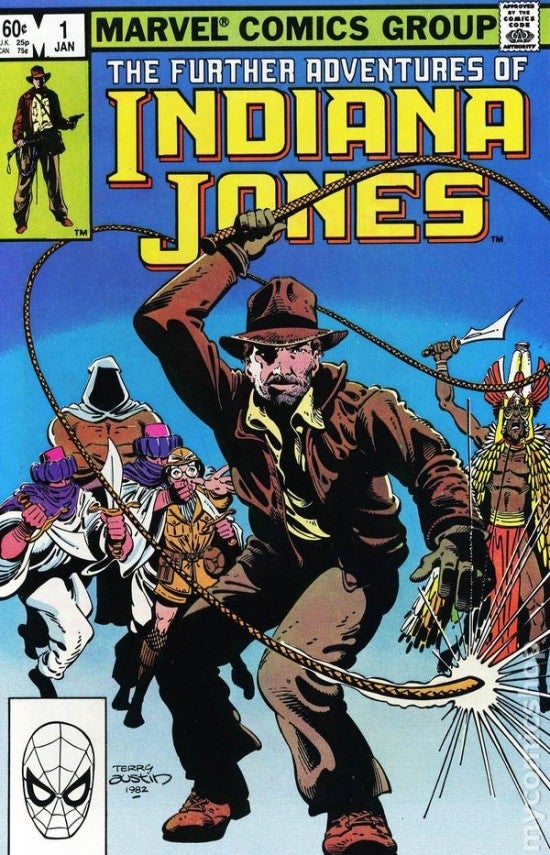 Will we see Indiana Jones comics soon? Both Marvel and Dark Horse have published Indiana Jones comics in the past--although the character has never been nearly as successful on the printed page as Han Solo and company. There hasn't been a canonical Indiana Jones story told in comics since 2009. Disney said shortly after the Lucasfilm acquisition that they had no immediate plans to capitalize on Indy onscreen, but there have been hints since then that there might be something in the works slightly longer-term. Could Marvel and Lucasfilm see the comics as a means to gauge fan enthusiasm for new material?