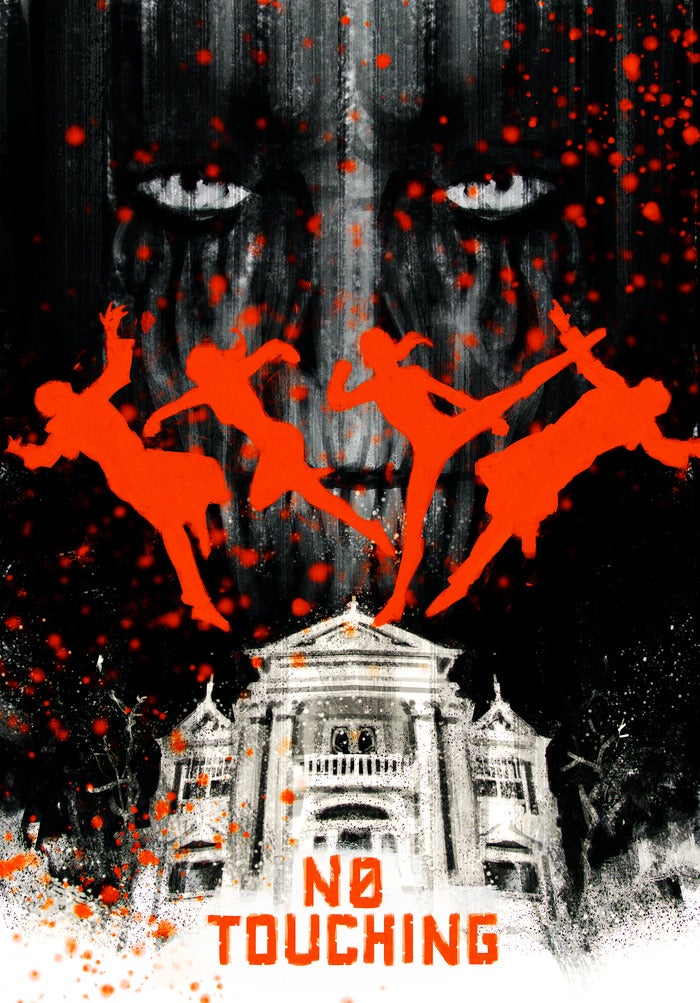 While there are a lot of short films on Kickstarter, none are quite as unique as No Touching. An action and horror hybrid with professional actors/stuntwomen Heidi Moneymaker (Avengers: Age of Ultron) and Zoe Bell (Kill Bill Vol. 1 & 2) fighting every paranormal possible inside a haunted house, it might be the best Halloween mash-up since From Dusk Till Dawn.

But if the premise doesn't sell, consider the two guys making it. Like The Avengers, Iron Man, and Guardians of the Galaxy? Well, No Touching's creators, Will Pilgrim and Adam Davis, helped create those Marvel blockbusters. As development veterans at Marvel Studios, the duo know a thing or two about crafting thrilling action spectacles with relatable characters. And now, Pilgrim and Davis want to inject that experience into a film of their very own. Here, the duo discuss their inspiration behind the project, the experience of independently producing their first professional film, and why No Touching will be the best 10 minutes out of anyone's day.

To start, can you guys lay out No Touching's general plot and premise?

Adam: No Touching is an action/horror hybrid short about two girls that are dragged into this travelling haunted house attraction by their friend. So his two female friends, played by Zoe Bell and Heidi Moneymaker, decide to come along. They’re not too thrilled about it, but they’re going to support their friend. They get to this house that has potential history of 80’s occult activity, but they’re not sure if it’s all an urban legend or actually true. They hear all these stories and feel a little freaked out, but they’re going to go in anyway. And in the performing haunted house, we have the fledgling house performers. They are really trying to make a statement and get some viral press on their attraction, so they decided to that they’re going to start assaulting people. They start on Zoe and Heidi because the friend became separated from them, and that’s the kickoff for the action portion of the story. So they get in there, they are assaulted, and a huge brawl occurs throughout the entire haunted house. We’ll see if they survive.

Wow. So where did you guys manage to find a haunted house to shoot in?

Will: We’re currently location shopping for a haunted house. Obviously not a real haunted house, but a house construct that would evoke that haunted house feel. A big thing down here in LA, which is actually the film’s inspiration, is that they have a lot of these traveling haunted house “plays.” They’re like walkthrough tours where you’re part of the story. And the performers can touch you, but you can’t touch them back. Hence, our title of “No Touching.” We currently have a slew of them around right now because it’s Halloween season, so we’re shopping around at those types of locations.

Cool. So how did this project come about? Since you two have known each other for a while, was this just something that you had been discussing for a while?

Adam: Will and I have been writing together for a while now, about five or six years. Through our writing, we were connected to Heidi Moneymaker. She was interested in breaking out of the stunt world and getting her face on camera more, and was looking for somebody to write a starring action role for her. So we were brought in, and we wrote an action feature for her, which we’re still trying to get off the ground. But in the meanwhile, we thought, “Ok, let’s see what else we can do with you.” We then found out that Heidi is a great friend of Zoe Bell. And the both of us are huge Tarantino fans and Zoe Bell fans from Death Proof. So we thought, “How do we get these two together?” We thought that the obvious answer is to watch them both fight, but then we thought it would be even cooler to have them team-up and kick ass together. So a buddy of mine had a kernel of an idea for a haunted house story that we developed, and it turned into this great horror action mash-up. We pitched it to Zoe and Heidi, and they both signed on. They were super excited about it. So here we are, trying to raise funds and awareness on it.

If you meet your goal, how will you distribute the movie?

Adam: We’d like to distribute it online. Our goal is to make it the best 10 minutes out of anyone’s day.

Will: Exactly. So, when people are back in their routine after the New Year, the mid-winter doldrums, we want to give them something that they can watch at home or at work, and go, “That was the best 10 minutes of my day! I’m glad someone shared that with me.”

Adam: As writers, I don’t think we try to follow a specific genre. I think we try to follow characters more closely. But we are fans of horror and we ware fans of action, and this project just lent itself to the action/horror genre, which we didn’t even consider a genre as we began our research. There are only a couple of movie that we would even consider to exist in that same venue. Dusk Till Dawn might be the only one we feel really connected to, because it has a lot of set-up and character building, and then it covers the horror and action simultaneously.

Will: Yeah, in some ways this is us taking things that we really love and throwing it together. We love horror and we love action, but also we love things that are fun. We wanted to throw that extra little sprinkling of fun on it.

So far, what’s been the most fun in putting all of this together?

Adam: The poster art is so phenomenal. It was by Andy Park, who we met through a contact here and have known for a while now. It made the project feel so real so fast. You just go, “Woah." That was only an idea five minutes ago, and now here it is.” All of the art that’s come together is amazing. Caitlyn Brisbin, our makeup artist, knocked it out of the park with all of the monstrous character designs. We were specifically going for makeup instead of prosthetic masks, because we wanted to see the bad guys emoting and reacting. You want to see them hurt, which is the best thing that Caitlyn's makeup has been able to do for us. 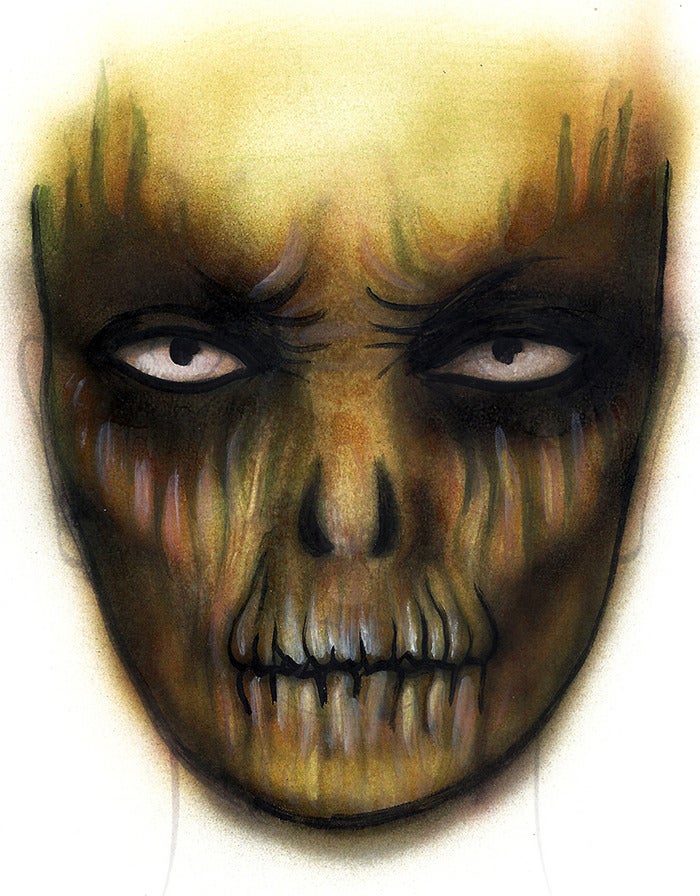 Will: It captures all of the fun and all of the horror. It’s been really fun to see it all come together. The enthusiasm of everybody we’ve worked with has created nothing but positivity and good fun. There’s been a ton of positive response towards the film's ideas, which helps us know that were on the right track.

Adam: Another thing that was also an absolute blast to do, beyond working with Zoe and Heidi, was making the Kickstarter video. The fun thing about the video is that we intercut outside of usexplaining why the audience should donate, with us doing some early stunt rehearsals with Zoe and Heidi. That was a huge thing to be able to do, to start from a kernel of an idea and just watch it develop. These two are obviously some of the best stunt minds in business. Just being able to  throw out ideas and have them morph that with their ideas, then come up with something really cool and organic was just tremendous.

You guys have obviously had a lot of production experience in the past with other companies, but it seems like you're connecting a lot of pieces yourselves for this project. Is No Touching the biggest production that you guys have jumped into?

Will: Definitely for something of this scale and the type of project. When you say “horror,” you have a certain expectation for your look, and when you say “action,” you add to your expectations. Then when you Zoe and Heidi in the mix, you have a lot. Our expectations have risen for every new fold we’ve added to this. This isn’t the first project that Adam and I have directed, but it’s definitely our first project of this scale. It’s been fun to bring in the people that we’ve been working with for the better part of a decade, and then branch out with people they’ve worked with. It’s one thing to say “Hey, let’s all get together and make a movie over the weekend.” But when you say “We’ve got this really strong idea and we want to create it at a certain level," entirely different walks of life become engaged and involved. We were so fortunate to get our Director of Photography, Nancy Schreiber, on board, and have her be so positive about the whole thing. Before we even met her, she read the script and said it was fantastic. It made us stop for a second and thank our lucky stars for the response that we were getting. Even internally, as Adam was saying, Heidi and Zoe’s takeaways have been great. So many people have said so many positive things.

Well that certainly sounds promising. Is there anything else that you guys wanted to mention about the project?

Will: We definitely want to emphasize the campaign's urgency. The end date is October 15th, at 12:00 PT. But beyond that, we just know that the project is going to be fun, horrific, and action-packed.

It’s going to be the best 10 minutes out of anyone’s day.

Cool! Thanks so much for taking the time, guys. Good luck.