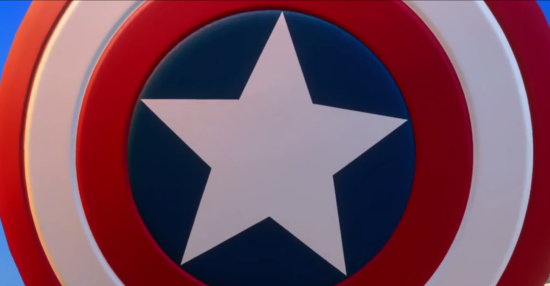 Marvel Superheroes will be joining the cast of the Disney Infinity video game.

A new teaser trailer for the game shows many of the characters already in the game, including Pixar characters from films like The Incredibles and Monsters, Inc., battling robots. A red, white and blue blur speeds through the area taking the robots out and we get a close up shot that reveals the blur to be Captain America’s shield.

That’s all we have to go on at the moment. It would be safe to assume that Captain America will be made available, but no word on what other characters will be playable just yet. The title of the video is "Get Ready to Assemble," so I would expect an Avengers heavy lineup.

Disney Infinity is a video game that features interactive, collectible toy figures. The figures feature characters from a variety of Disney properties including several Pixar films and Pirates of the Caribbean. Placing one of these figures on a Disney Infinity Base connected to the game makes that figure’s character playable in Disney Infinity. Now it seems that Marvel figures that will add playable Marvel characters to the game are in the works.