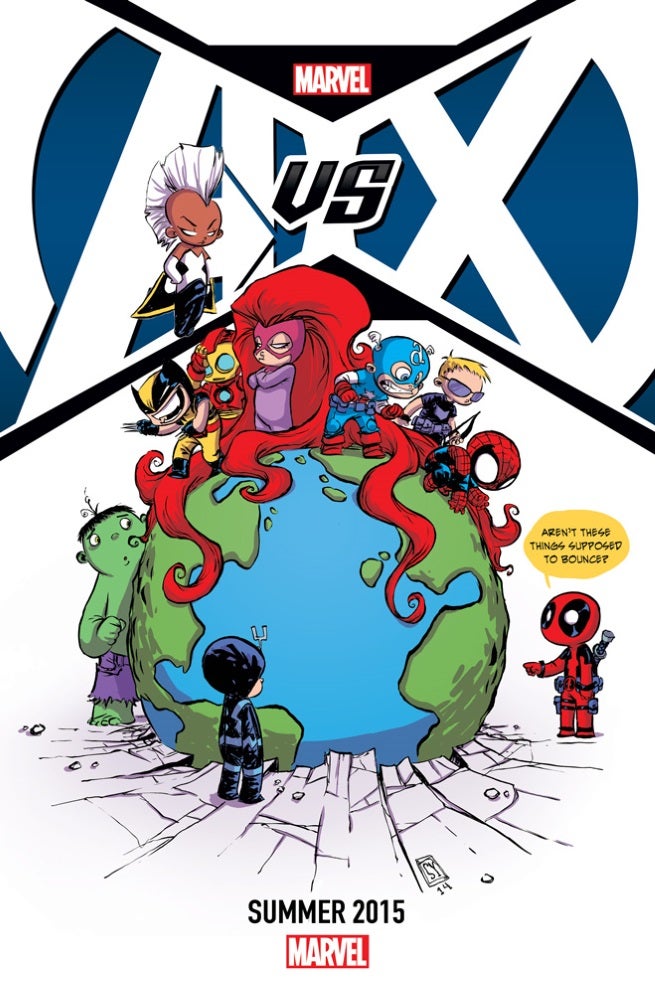 It looks like Earth’s Mightiest Heroes and the Children of the Atom are coming back for a rematch. Marvel Comics has released a new teaser for Avengers vs. X-Men, coming in summer 2015.

As with many of the teasers Marvel has released over the past few weeks, this one is a call back to previous Marvel event. The original Avengers vs. X-Men was published in 2012, and basically every top tier creative Marvel had in its bullpen worked on the event. The event saw the two superhero factions go to war over the fate of Hope Summers when the Phoenix Force came to Earth looking for a host. It also resulted in the Cyclops becoming possessed by the Dark Phoenix and killing Professor X.

Interestingly enough, this Avengers vs. X-Men teaser – drawn by Skottie Young – only shows two X-Men. Wolverine, who is also a fulltime Avenger, and Storm, who was briefly a member of the team while married to Black Panther. Deadpool is also there, and he is often grouped into the X-Men family of characters, but is really more of a wildcard than anything.

The king and queen of the Inhumans, Black Bolt and Medusa, are also present, but they are definitely mutants.

This is the latest in a series of event teasers that Marvel has released over the past few weeks. Previous teasers include Civil War, Age of Ultron vs. Marvel Zombies, Years of Future Past, Planet Hulk, Armor Wars, House of M, The Infinity Gauntlet,Old Man Logan, Inhumans: Attilan Rising, Ultimate Universe: The End, Age of Apocalypse, Future Imperfect, and Amazing Spider-Man: Renew Your Vows.