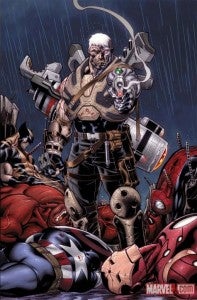 With everybody talking about the DC Comics Relaunch, what can Marvel Comics do to get back the attention of the media. What about teasing the slaughter of the Avengers? Yes, a teaser image for the upcoming Avengers: X-Sanction mini-series shows an Avengers team that appears to have been wiped out by Cable. The bodies of Iron Man, Red Hulk, Captain America, Wolverine, and Spider-Man all lie at the feet of Cable, who is packing some massive firepower. Of course, this is likely just one of those teaser cover images that may or may not reflect the story inside. Maybe, it's an alternate future or just an imaginary dream by Cable. There's no way that Marvel would actually kill off the Avengers with their mega-blockbuster movie coming next summer, right? In a press conference call about the upcoming mini-series, Marvel Comics kept it vague and never said the Avengers would be killed. The teaser image is the only indication that death could be imminent for the Avengers. In fact, when specifically asked if Cable was going to kill the Avengers, Marvel assistant editor Marc Strom said, "You'll have to read to find out…but it looks like he isn't happy with the Avengers from that preview art we just saw." What Marvel Comics did reveal is that Avengers: X-Sanction will be a four issue mini-series written by Jeph Loeb with art by Ed McGuinness. The series will feature the return of Cable, as he takes on the Avengers. The main thing to know about Cable is that he is motivated to protect his daughter by any means necessary. Marvel also revealed that Avengers: X-Sanction will help to set the stage for what is coming all throughout 2012. Marvel Senior VP of Publishing Tom Brevoort pointed out that it's not a coincidence that Fear Itself, Schism, and other big stories end at the same time.

Marvel Teases Death Of The Avengers