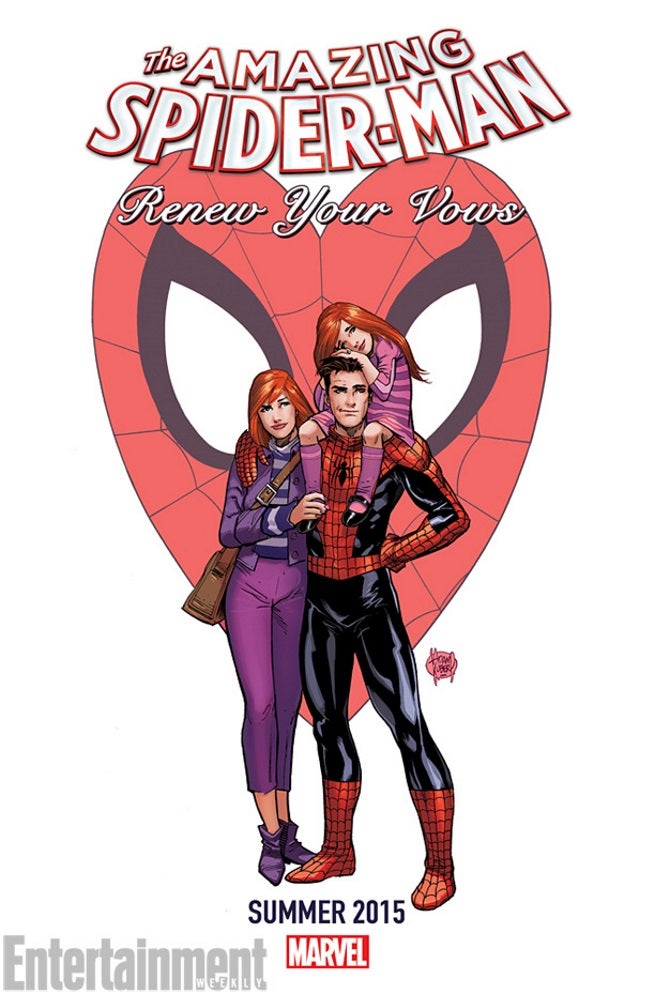 Remember a couple of days ago, when Spider-Man writer Dan Slott tweeted for fans to set their watch for their next Spider-Man freakout? I think the timer just went off.

Marvel Comics has released the latest of their summer 2015 teasers (via EW), and boy is this one going to get Spider-Man fans riled up.

The teaser, from artist Andy Kubert, is for The Amazing Spider-Man: Renew Your Vows, and features Spider-Man and Mary Jane – with a child.

Peter Parker and Mary Jane Watson were originally married in the 1987 comic book Amazing Spider-Man #21. Many higher ups at Marvel, including Chief Creative Officer Joe Quesada, have publicly stated that the marriage was a misstep that locked Peter Parker into a box that he could never quite get out of.

Then, in 2006, Quesada drew the controversial story arc One More Day, which saw Peter Parker sacrifice his marriage, in a deal with Mephisto, in order to save the life of Aunt May. The marriage wasn’t just undone, but history was entirely rewritten so that Peter and Mary Jane never go hitched in the first place.

And then there’s the child. To drive the severity of the issue home, Mephisto gave Peter Parker and Mary Jane a glimpse at the daughter they’d never have because they never got married. Is Renew Your Vows a look into an alternate future were Peter Parker made a different choice?

There’s also the 1990s story where Mary Jane becomes pregnant with Peter’s child, until the Green Goblin drugs her and steals the baby (‘90s comics everybody). This dangling plot thread would eventually lead to the creation of Mayday Parker – Spider-Girl – in an alternate universe where the child was born. Could this be a way for Marvel to introduce Mayday to the 616? Seems we’ll have to wait until next summer to find out.

This is the latest in a series of event teasers that Marvel has released over the past few weeks. Previous teasers include Civil War, Age of Ultron vs. Marvel Zombies, Years of Future Past, Planet Hulk, Armor Wars, House of M, The Infinity Gauntlet,Old Man Logan, Inhumans: Attilan Rising, Ultimate Universe: The End, Age of Apocalypse and Future Imperfect.