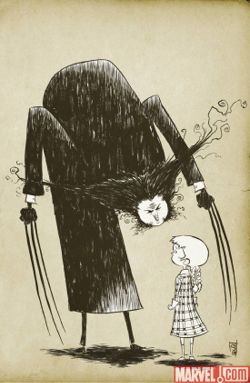 With less than a month and a half before the big screen event, Wolverine fever is hitting epic proportions. Marvel has unveiled plans for a 35th anniversary celebration of the debut of the feral mutant. November 2009 marks the debut of Wolverine in issue 181 of The Incredible Hulk. However, with X-men Origins: Wolverine hitting screens on May 1st, Marvel editor Joe Quesada has decided to name April Wolverine Art Appreciation Month.

If you already thought Wolverine was on every issue that Marvel published during the 90s, you haven't seen anything yet. Along with the one shots, many non-Wolverine titles will feature variant covers which depict the mutant in the styles of artists such as Picasso, Edward Gorey, Andy Warhol, and many more. One of the best covers revealed so far is done in the style of C.M. Coolidge's famed Dogs Playing Poker painting. On that cover, various incarnations of the mutant enjoy a friendly game of five card stud.

Marvel has also released about a dozen new images from the Wolverine movie on their website. Among the newest images posted over the past week are of Will.i.am as Wraith and a heavily made-up Kevin Durand as the Blob. A new trailer for the Wolverine movie has also been posted recently.

The Last of Us Scores Series-High Ratings With Episode 4