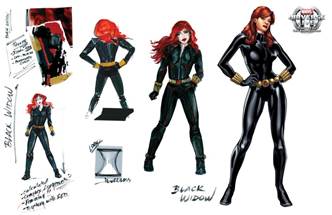 "With a fair balance between evil doers and the ones put on this planet to thwart their plans the following characters will play a role during the Marvel Universe LIVE! arena spectacular – Black Widow, Captain Marvel, Maria Hill Pepper Potts, Black Cat and Madame Hydra," says an announcement which is accompanied by a picture of a circle of athletic, young women looking over concept art, including a page of Black Widow character sketches as seen above. 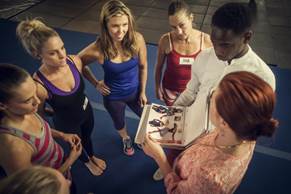 More information and artwork you can visit the official website for Marvel Universe LIVE! here. They've been updating their photos and the like pretty frequently, and announcing new characters about once a week.

Marvel Universe LIVE! will bring Marvel’s most iconic heroes and fearsome villains to life like never before during a live-action arena spectacular that will tour 85 North American cities in its first two years, integrating a Marvel character-driven story with state-of-the-art special effects, pyrotechnics, aerial stunts, martial arts and countless other show elements.