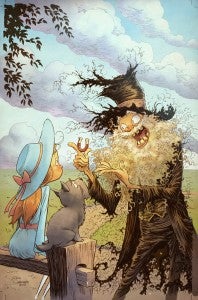 Marvel Comics has released a preview of the variant cover to Road to Oz #1, drawn by series writer Eric Shanower.

The image, shown at left, covers the first issue of a series that sees Dorothy and Toto head back to Oz for an "all-new" adventure, will be on store shelves September 5 and features interior art and a standard cover by fan-favorite artist Skottie Young.

Check out the official description below!

Marvel is proud to present your first look at Eric Shanower’s variant cover to Road to Oz #1! Dorothy is off on another fantastic journey to Oz, and she’s bringing Toto along for the ride! But when the dusty Kansas roads turn into magical highways, where will it lead them?  And even with the help of Dorothy’s new companions – an old man with a magic magnet and a young child named Button-Bright – will they be able to find their way?! Dorothy’s all-new adventure, courtesy of the Eisner Award winning team of Eric Shanower and Skottie Young, begins in Road to Oz #1, coming to comic shops everywhere, the Marvel Comics app, and Marvel Digital Comic Shop this September.

Pencils and Cover by SKOTTIE YOUNG