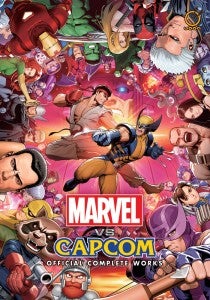 According to a joint announcement just released to the press, the softcover art book will be nearly 200 pages and include "all of the official artwork, sketches, and bonus material from all of Marvel and Capcom®’s video game collaborations—from 1993’s The Punisher arcade game right up to 2012’s smash-hit Ultimate Marvel vs. Capcom 3".

“This book means a lot to UDON,” says Publisher and Editor-in-Chief Erik Ko. “It was back 10 years ago that Joe Quesada at Marvel Comics gave UDON our first freelance job, and kick-started our creative services department. Then just a few years later, we became our own publisher, working closely with Capcom to publish original Street Fighter comics! Being able to publish a book containing amazing work from both Marvel and Capcom is like a big ‘thank you’ from us to the folks who helped make us what we are today.”

The softcover version will be available in bookstores, but an exclusive hardcover edition will come first, debuting on July 11 as a San Diego Comic-Con International exclusive. The commercial release of the book won't be until November.