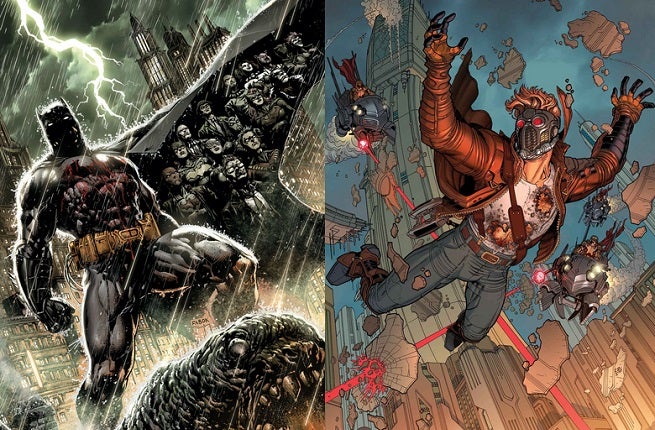 Proving that he's never heard of "prep time," or just really likes to be insulted on the Internet, Legendary Star-Lord writer Sam Humphries today at WonderCon said that he wishes there would be a Marvel/DC crossover story.

Why? So that Star-Lord and Batman could fight, because Star-Lord would "kick Batman's ass," of course, according to IGN's write-up of the panel.

As you can imagine, the comments thread below the story -- which deals with a lot of other questions from the Marvel Comics Q&A session -- has been entirely hijacked by vitriolic and often hilarious responses to the question and to Humphries' answer. It's worth checking out.

Sad news for all involved: For the umpteenth time in the last five or ten years, Marvel editorial put the kibosh on the idea of a Marvel/DC crossover.

If you want an explanation for why, look no further than Marvel's Tom Brevoort, who gave a lengthy and fairly thoughtful explanation as to what makes them less-than-desirable recently on his Tumblr.

"Over the years, we've published an awful lot of inter-company crossovers, far more than I could have dreamed of when I was a reader," Brevoort said in part. "And, for the most part, they've tended to be disappointing; even the best among them have not been universally beloved, because the mythical version of whatever meeting that exists within each fan's head is inevitably better than what winds up on the page in the regular course of doing business. There have been plenty of crossovers that I've liked and I'm sure that you have as well, but as a general rule of thumb, these books are nobody's favorite comics."