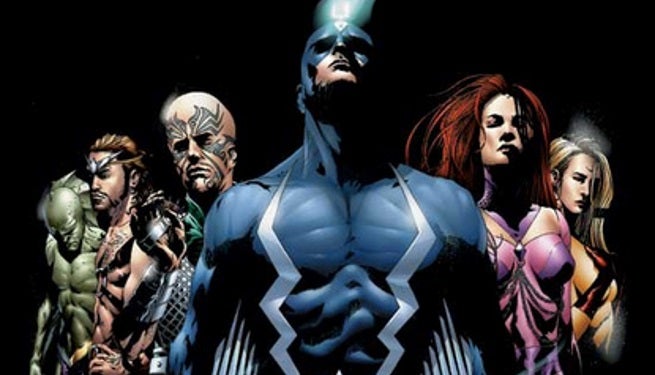 A transformation took place on the midseason finale of Agents of S.H.I.E.L.D. Skye and Raina finally entered the temple with the obelisk and found out “what they become.”

The episode didn’t offer much in the way of explanation, however. There were some crystals in the Obelisk, and the crystal kind of…blew wind? Then Raina and Skye looked like they had turned to stone, and Skye burst free, nearly taking the whole place down with her.

I’m sure the second half of Season 2 will supply a bit more explanation for what exactly happened in the temple of the alien city, but we’re pretty sure we already know: Terrigenesis, the process that gives an Inhuman their superpowers. What’s a Terrigenesis, you ask? We’ll explain.

The potential for an Inhuman’s superpowers exists within each Inhuman’s individual genes, much like the X-Gene in a mutant. However, unlike mutants, an Inhuman’s powers won’t manifest on their own when the individual reaches a certain age.

That’s where the Terrigen Crystals come into play. Terrigen Crystals is an extremely rare mineral, found mostly growing in the subterranean waters of the Earth’s moon. These crystals are likely what was inside the Obelisk.

In the comics, the Crystals need to be exposed to water, at a certain temperature, in order to release a substance called the Terrigen Mists. Agents of S.H.I.E.L.D. seems to have done away with those particular requirements, but the Obelisk did need to be taken to the temple to open. Normally, the mists would be pumped into a special flux chamber, where the Inhuman initiate would be waiting. It seems the temple in the alien city is one such chamber.

The individual inhales the Mists, and the Mists rewrites the individual genetic structure, activating their latent Inhuman gene. Often this occurs while the individual is in a cocoon – as seen in Agents of S.H.I.E.L.D. – though not always.

What powers the person emerges with is theorized to be based on the individual’s personal dreams and nightmares, reflecting their greatest desires or worst fears. An individual who idolizes a superhero, for example, may gain a superhuman physique, but if they fear becoming a monster, then that is exactly what they make transform into. Their powers also reflect the needs of the Inhuman community, often preemptively adapting to the next home of the nomadic species, or the technology of the modern day, such as being undetectable to electronics. This suggest a certain amount of sentience in the Terrigen Crystals.

So that’s the answer to the eternal question of “where do Inhumans come from?” We’ll have to wait and see if the process is repeated in the second half of Agent of S.H.I.E.L.D.’s second season.

Marvel's Agents Of S.H.I.E.L.D.: What Is Terrigenesis?