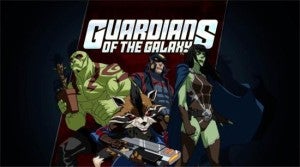 This morning (west coast time), Marvel Television will unveil their "most animated panel ever," including a look at Hulk and the Agents of S.M.A.S.H. and more discussion on Avengers Assemble, Ultimate Spider-Man and more.

Ahead of that, though, the folks at Marvel have shared the clip below, featuring the Guardians of the Galaxy on Sunday's episode of Ultimate Spider-Man.

With rumors that the team--whose feature film comes next year--will soon have an animated series all to themselves, will this and their previous Marvel Animated appearances be a kind of launching pad for that?

Check out the clip and official description below.

Spider-Man must lead his team of teen heroes against the greatest assembly of super villains the world has ever seen! Season Two of the hit series ULTIMATE SPIDER-MAN continues as Spider-Man and Nova head to space in a new story by superstar writer Brian Michael Bendis! Something is headed Earth’s way, and there’s only team in the universe who can help – the GUARDIANS OF THE GALAXY! Head on a deep space adventure like no other as Spidey, Nova and the Guardians of the Galaxy save Earth from destruction!

Marvel's Animated Guardians of the Galaxy On Ultimate Spider-Man: Preview