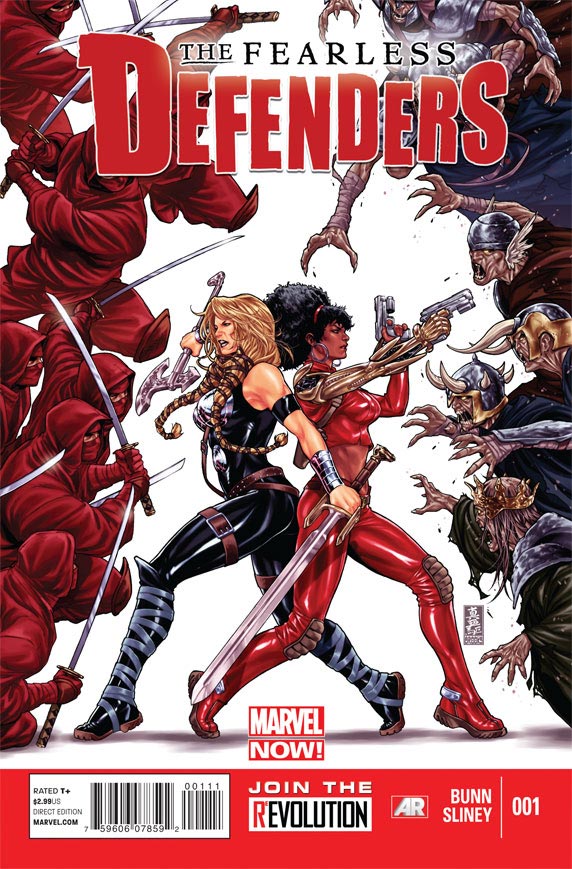 Marvel has had a spotty record of late with female-led comics; they've often descended into cheesecake and there have been periods (very recently) in their publishing history when none existed at all. An all-female team like DC's long-running Birds of Prey has been one of the things that Marvel hasn't been able to really master. Even female-heavy teams like recent iterations of Heroes For Hire didn't really connect with the readers in the way the publisher had hoped.

And yet many of the strongest female characters in comics have been Marvel characters, and Kelly Sue DeConnick's current run on Captain Marvel is in strong contention for the be ongoing superhero monthly in Comics, let alone at Marvel.

The publisher has also historically had difficulty figuring out what to do with its Defenders property. A lucrative team name with a long history attached, the book that once featured characters like Dr. Strange, The Hulk and Silver Surfer has tried different permutations of lineup changes, creative team changes and concept changes in recent years, with heavy hitters like Erik Larsen, Keith Giffen and J.M. DeMatteis and even Matt Fraction unable to get significant traction with the title.

Perhaps it makes a kind of sense, then, to introduce The Fearless Defenders, putting characters from Cullen Bunn's Fear Itself: The Fearless and that most recent Fraction/Dodson run on The Defenders together in a series that will co-star Misty Knight, Valkyrie, and revolving cast of female Marvel heroes including Dani Moonstar.

Launching in February, the book will be written by Bunn with art by Will Sliney, as teased last week.