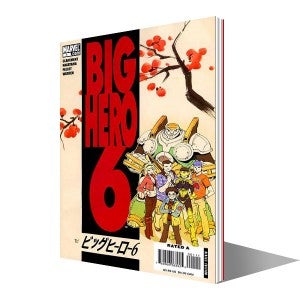 Big Hero 6, the forthcoming animated feature film by Marvel Studios and Disney Animation, will hit theaters in the fall of 2014, according to Rentrak, a company that works regularly with studios in Hollywood and around the world.

They tweeted the release date (in Spain) as November 21, 2014, meaning that if their information is good (there's no reason to assume it won't be) and if the release is fairly normal for Disney, it should hit U.S. theaters within a couple of weeks in one direction or another of that.

Blue Sky Disney, a UK-based Disney blog, announced in June that an adaptation of the X-Men universe spinoff Big Hero 6 will be the first Marvel property adapted into an animated feature by the company. Apparently greenlit by Disny Animation and Pixar head John Lasseter, the film will come from Disney Animation Studios, not Pixar.

Created by Steven T. Seagle and Duncan Rouleau, the story revolves around a team of Japanese, government-sanctioned superheroes led by Marvel staples like Sunfire and Silver Samurai whose adventures seem uniquely suited to a Disney animated feature, as the setting and the relatively unknown state of the characters involved make it fairly flexible in terms of crafting an all-ages story.

One Piece Explains Why Oden Wanted to Open Wano

My Hero Academia Uncovers the Hero Origins Behind Lady Nagant