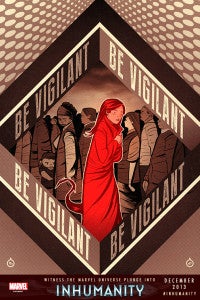 Remember those anti-mutant posters circulated by Trask Industries in X-Men: Days of Future Past? Well, this latest image promoting Inhumanity is pretty similar, and seemingly confirms the theory that, following the events of Infinity and Inhumanity, The Inhumans will basically take the place of mutants as the most hated and feared class of super-people in the Marvel Universe. "Be vigilant," the poster says, depicting an Inhuman in a way that's quite literally demonized. No room for subtlety in propaganda in the Marvel Universe, it seems...! EDIT: As you can see in the comments, "Juan Doe is the artist of the promo. Great interior artist but the go-to guy for designing ads and covers with an agit-prop aesthetic." Thanks to Feeding Ground artist Mike Lapinski for the details! With rumors of an Inhumans movie on the horizon and the reality that, for now at least, Marvel Studios don't seem likely to get the rights to "mutants" and the X-Men family of characters back from Fox anytime soon for the purposes of movies and TV, one has to wonder whether all of this will help bolster the film side, effectively giving the studio an opportunity to explore some of the same themes and stories as X-Men, but with a family of characters who Marvel owns and who don't have baggage with the audience.