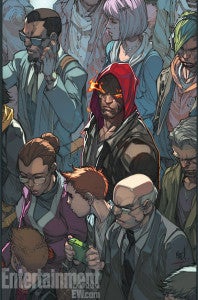 Having grown up in Syracuse, every so often I'll see a reference that grabs me. Archer & Armstrong writer Fred Van Lente went to Syracuse University, as did The Smurfs director Raja Gosnell. So, too, did at least two members of the iconic rock band The Velvet Underground, so when that band gets name-dropped in a story about comics, you can be sure I'm listening. As most fans know by now, The Inhumans are a key part of Earth's defense force while The Avengers are off in space doing what they do in the currently-ongoing event miniseries Infinity. They're also starring in Inhumanity and Inhuman, both written by Matt Fraction. Inhumanity sees the Terrigen Mists begin to turn members of the human race into Inhumans in previously-unseen numbers while Inhumanity will pick up o that with a world where there are new Inhumans and society is struggling to deal with them (and vice versa). The series, written by Matt Fraction and illustrated by Joe Madiurera, is an all-star attempt to revitatlize a flagging franchise that's being discussed as a very real option for feature film adaptation soon. "There is something alien in the Inhumans, something other, something not from around here," Fraction told USA Today in a new interview rolling out All-New Marvel NOW, adding that it's "the secret kingdom stuff, the weird powers, the mixture of science fiction and pure fantasy that makes up their history" that makes them so cool." "You can tell the mark of a quality human being by their enjoyment of the Inhumans," he added. "Like being a Velvet Underground fan."

Matt Fraction Compares The Inhumans to The Velvet Underground