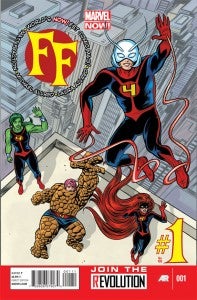 The writer's final issue of FF will be #11, due out this month, while his last Fantastic Four, #12, will hit in September. Fraction has outlined a basic story that incoming writer Karl Kesel (Fantastic Four) and Lee Allred (FF) will implement, according to CBR.

"The demands of Inhumanity on Matt’s time increased to the point where something had to give, and that something turned out to be Fantastic Four and FF," Marvel's Tom Brevoort said. "Matt outlined the balance of the story he was going to be telling in those books, much as he’d done for Fear Itself: The Fearless a while back, and we’ve brought in Karl Kesel on Fantastic Four and Lee Allred on FF to execute those plans and to make them their own."

Allred is the brother of FF artist Mike Allred, and a science fiction writer of some note in his own right. Kesel is a veteran comics writer/artist who recently made headlines when he sold his comic book collection to pay for the medical care of a baby he and his wife adopted, who was born with a drug addiction and medical issues. Fans who heard about the sale raised thousands of dollars to buy some of his comics back for him. He inked Fantastic Four during the legendary run by Mark Waid and the late Mike Wieringo.