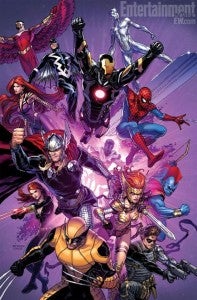 One of the worst-kept secrets in comics is now officially out: Matt Fraction will write a new series centered around The Inhumans, spinning out of the events of Infinity.

The characters, who are rumored to have a movie in the works, are playing a massive role in Marvel's summer event, in which a number of lesser-known hero teams take point on protecting the Earth while the Avengers are in space.

Entertainment Weekly announced the news, revealing a storyline called "Inhumanity." In "Inhumanity," the Terrigen Mists are released around the world, resulting in the activation of Inhuman cells in millions of Inhuman descendants

Needless to say, the emergence of all these new super-powered individuals has a huge effect on the Marvel Universe. The "Inhumanity" storyline will result in a new ongoing comic book series from Matt Fraction called Inhuman.  According to Fraction, "It becomes a superhero story and a mythical story, all revolving around turning the world into a world full of superheroes."

Inhuman society will split into factions, which Marvel's Axel Alonso compares to Games Of Thrones. It's an interesting concept, and one that lends itself to being easily digested by the masses--which is something that The Inhumans have traditionally had a problem with. Like many of the most truly Kirbyesque creations of Jack Kirby, they're a bit "out there" for mainstream audiences.

That said, the Paul Jenkins-Jae Lee Marvel Knights Inhumans miniseries was an award-winner and a best-seller, and was recently adapted into a direct-to-DVD motion comics release--so it's clear these characters can appeal to a broader base if they're given an opportunity.

Apex Legends Brings Back Limited-Time Mode With a New Twist