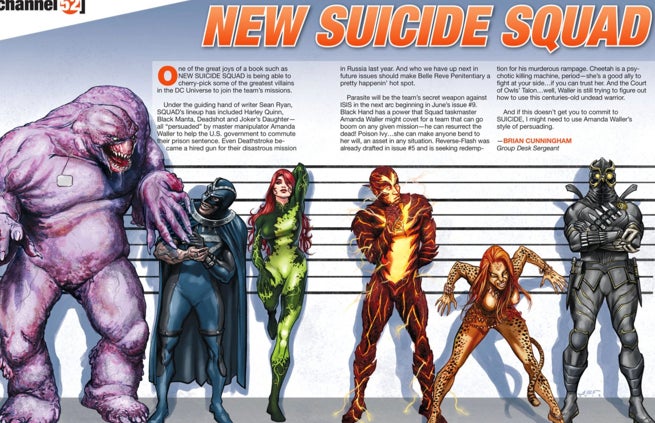 DC Comics’ Suicide Squad is stepping their game up in the coming months, swapping out the series' lesser-known characters for some of the DC Universe’s biggest villains.

As the publisher revealed in their Channel 52 promo page in the back of every DC book out this week, their New Suicide Squad series will slowly introduce an upgraded line-up over the next few months.

The new cast will ultimately include:

* The Reverse Flash, one of Barry Allen’s marquee villains. He's currently the primary villain on The CW’s The Flash television series.

* Talon, a lethal, undead assassin for the Court of Owls. Talon was introduced to the Batman mythos during Scott Snyder’s opening New 52 run on the main Batman title. He was recently featured in the DC Animated feature, Batman Vs. Robin.

As DC raises the Suicide Squad’s profile with television and feature film iterations, it looks like they’re reinvesting in the comic book with a much more buzz-worthy (and therefore sales-friendly) team. The new lineup will phase out the current Squad headlined by Joker’s Daughter, Black Manta, Death Stroke, and more. Series writer Sean Ryan will continue to pen the Squad's adventures.

The new team will fully assemble in Suicide Squad #9, which hits comics shops this April.